Glenn Maxwell had brought smile in the faces of Preity Zinta and other sponsors of King Eleven Punjab. 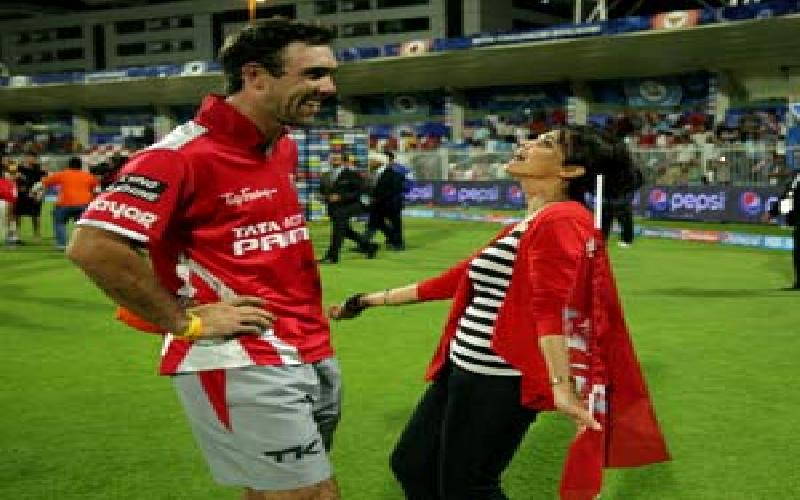 The article speaks about the batting heroism of Glenn Maxwell for the third time on 22nd April, 2014, in Sharjah in the match of IPL 2014 between Kings Eleven Punjab and Sunrisers Hyderabad.

This is third time Maxwell came, saw and conquered. Before the Kings Eleven Punjab and Sunrisers Hyderabad match was played in Sharjah on 22nd April, 2014, there was huge plan to bowl against Glenn Maxwell. The reasons were obvious he had plundered the stadiums of Abu Dhabi and Sharjah in the first 2 matches. Preity Zinta, one of the sponsors of the team is known for her sweet smile and dimples in her face. Maxwell made her smile again.

But all the plans fell flat. Kings Eleven Punjab this time batted first.

Shikhar Dhawan won the toss and elected to field. This time Sehwag and Pujara gave a brilliant start. Sehwag scored 30 runs in 22 balls with three boundaries and 2 sixes. Pujara scored 35 runs in 32 balls with 6 boundaries. The opening partnership scored 51 runs and created an ideal platform for big hitter to take the score beyond 180 runs.

Then Maxwell came. For the first 2 to 3 overs he was quite. Then the extravagant shots began. And it continued for a long time. He scored 95 runs in 43 balls with 5 fours and 9 sixes. Fortune favours the brave. He once got caught out in the ball of Sammy when he was 62 batting. Then it was seen that the ball was a no-ball. There was over-stepping. He came back to the liking of the crowd and hit more boundaries and over-boundaries. Centuries don’t count a lot in T20 matches. So Maxwell missing out on centuries did not matter a lot. In this match Miller and Bailey got out cheaply scoring 10 runs each. Kings Eleven Punjab scored 193 runs in 20 overs.

Among the bowlers, Bhubaneswar Kumar was the only economical bowler with 3 for 19 runs in 4 overs. Amit Mishra took 2 wickets but went for 56 runs in 4 overs. Steyn was also expensive giving 26 runs of his 4 overs.

In reply Sunrisers Hyderabad lost wickets at regular intervals and lost the way within first 6 overs. They got all out for 121 runs, losing the match by 72 runs. Rahul was the highest scorer with 27 runs, but never looked liking giving a contest. Balaji took 4 wickets.

Maxwell had brought smiles in the faces of Preity Zinta and other sponsors of Kings Eleven Punjab. He had blasted the bowlers in 3 crucial matches and against all the great bowlers around the world. It is to be seen how long Maxwell can continue the magic.

TAGS : Glenn Maxwell Preity Zinta Kings Eleven Punjab Sunrisers Hyderabad.
Let us know how you like this article. Like it and Rate it below.
841 0
0
Thanks for rating this article
0 stars - by 0 user(s)