Irvington Edges Somers 8-7 in Tense Back and Forth 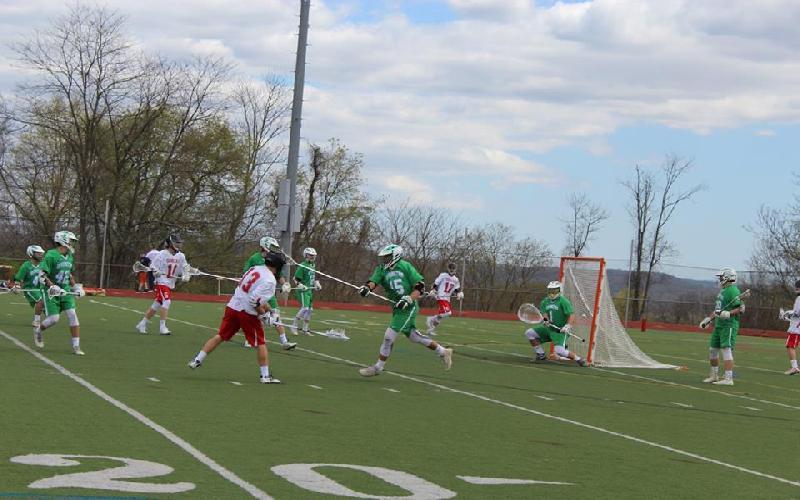 On Saturday afternoon at the high school, the back and forth on the field between Somers and Irvington didn’t allow either squad to take a hold and the scoreboard mostly followed suit.  A two goal Irvington lead in the fourth was quickly covered by the Tuskers, but the aberration left no doubt that the difference would come down to who scored last. Unfortunately, it was the Bulldogs that gritted out the final goal and took the day.

Irvington began the day as they ended it.  Louis Lustenberger picked up Weston Bishop’s faceoff and saw no reason to let Somers get set.  Daylight ahead, he rambled Irvington to a 1-0 lead before either crowd blinked.

After Irvington Goalie Josh Schultz had Somers not believing their eyes on shots by Joe Hashmall and Vincent Cartelli, Tusker Goalie Tyler Carr did his own dash toward the sun. On an errant pass, he took possession and Irvington’s dare all the way to midfield.

He found an open Jake Cordes and Somers was set up on the run. Vincent Cartelli sucked in the defense and hit Mike Couture who tied the score at 7:53.

Somers got right back to work on the next possession. Mike Cliff swung out front and nowhere to go, the attacker passed on pushing through.

Instead, Cliff pulled up and dinked a pass over the defense into Couture who made easy work of Schultz again.

But the Irvington goalie owned the rest of the period. He scooped a short hopper out front by Evan Kieltyka, cutoff a centering pass from behind by Cartelli and snared a Graham Roediger shot to end the first quarter at 2-1 Somers.

The lead didn’t last long, and the Bulldogs hit the deck to do it.  Bishop taking the faceoff, and the offense working the corners, Dillon Morley executed a wraparound on the down low and went to his knees to tie the score at the 11:11 mark.

Somers would then stick to the script and retake the lead at 8:22. Cliff swung out front and put a bounce on Schultz who got a foot on the misdirection to no avail.

Moments later Somers picked up a loose ball to really put Schultz at a disadvantage. Only this time he would let his equipment do the talking and Irvington was soon boasting another tie. Kieltyka scooped the turnover at midfield and Andrew Lowman was the point blank beneficiary of a Cartelli pass but Schultz stood tall with his catcher.

Off the other way on the goaltender’s outlet, it was Morley on the break with Eric Parke.  No mercy, Parke would leave the Somers goalie gasping at another tie at 6:07.

After Carr got into the act with kick and catcher saves on his own, Carson Cerrito made space were there was none. Stopped short in front, the Bulldog attacker would not be denied until he found an opening to slip one past Carr to close the half at 4-3.

As expected, Somers drew even as Andrew Lowman executed a little slight of hand to start another break.  Stripping the ball in the Irvington end, Lowman outlet Hashmall before Cartelli put the equalizer on Schultz at 10:54.

Somers showed it could go on the set up too.  Keeping the ball on the move, Roediger found Jake Kessler on the sly from behind the net, and the easy goal only awaited the crowd’s awe to give Somers its last lead at 5:47 of the third quarter.

The Tuskers got little time to revel in the lead either. Bishop winning another faceoff, this time Morley was drawn to the daylight. He made a beeline for the goal and riffled a shot pass Carr to pull even seven seconds later.

A scramble at midfield would then give numbers to Irvington and ultimately an edge on the scoreboard.  Aldo Kaczmarkiewicz got whistled for pushing Morley from behind, and the attacker would converted at 3:40.

Morley then broke the mold. Picking up a forced pass inside, the attacker covered the ball and scored with 3:22 remaining.

Only 63 seconds later, Somers got back on track.  Hashmall fronted inside, the senior gritted it inside and got an under hander off past Schultz to get back within one.

Carr kept it that way by turning away an Irvington flurry to close the third quarter and put the Bulldogs on their horse when his catcher triangulated another Somers break.  Eating up a Lustenberger’s shot, Carr outlet Lowman and Couture finished off Shultz with 8:56 left in the game.

A Lowman strip again put Somers on the break and a lead seemed to loom. But the Somers crowd winced as they felt Roediger shot too early.

Shultz agreeing, he easily handled the shot, and the break was on the other foot.  This had Jake Staropoli taking the high step downfield, and Carr had no chance on what proved to be the winning goal at 5:37.

However, the drama wasn’t over and Shultz played lead.  The Bulldog goalie came up big on several occasions, but his teammates had the kicker to close the game.

The teams chasing down a loose ball in the corner, Roediger recovered in the finals seconds, and the net stood empty. But the Irvington defense was able to converge, stripped the ball and sent Somers over the edge for good.

TAGS : LacrosseSomersIrvington
Let us know how you like this article. Like it and Rate it below.
479 0
0
Thanks for rating this article
0 stars - by 0 user(s)

Cricket is a very popular game around the world. There are lots of stadiums in India to enjoy the beauty of cricket.

A Game Of Chess Is A World In Miniature

Playing a game of chess is like a journey into an imaginary world where you can play different roles and see the reality of the game from various perspectives..