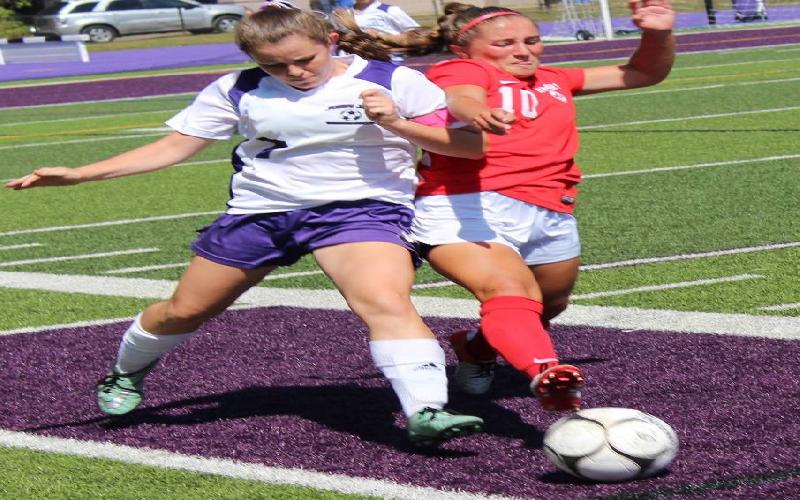 If time of possession counted toward the final score in soccer, Saturday afternoon’s Girls Class A meeting between Somers and John Jay would have been a blowout.  But the Tuskers will still take the narrow 3-2 victory they held on for in Cross River, and as long they keep the handy work with their feet going forward, the success should continue.

On the left end of the field, Somers Forward Jessica Rodriguez did her part with plenty of deft, and a frontline of Amanda Brugger, Melina Couzis, Katrina Kurtz and Sloane Ramsey had the John Jay goalie trying to read the Tusker triangulation from the outset.

Not light course work, Elizabeth Jahn was quick to cut off several Somers advances and gave the home crowd something to sit on as the play mostly stayed put on the north side of the field.

In the offing and on John Jay incursions, Somers defender Claire Mensi cast a looming shadow, and while having plenty of leg to go long distance in the other direction, she wasn’t short on the footwork either.  Mensi provided a bridge in the middle to keep Somers running downhill, and Danielle Cucchiarella, Caitlyn Lucadamo and Hannah Tiso worked effectively in support.

But the day officially began going south for John Jay as a little serendipity left Jahn a sitting duck. A Somers throw in on the goal line seemed to miss the urgency of everyone, and when the ball high hopped right out in front to Amanda Bruggar, she made easy work of the lull and Somers had a 1-0 lead at the 26:30 mark.

The ball control continuing, John Jay managed to slip through a crack four minutes later.  Caroline Touzeau broke free off an outlet up field and kicked across the outstretched dive of Somers goalie Lauren Jockimo.

Undeterred, Somers stuck to the program.  First, Mensi kept the ball at midfield and found Rodriguez ready to dance on the left.  Taking a two step, the forward slickly nudged the ball with the outside of her right foot to an open Katrina Kurtz in the middle.

Jahn was the one laying out to no avail this time, and Somers took back the lead with 7:19 left in the half.

The close of the half almost saw Somers break it it open and connect the good ball movement to the actual score. Rodriguez rattled the crossbar after Mensi showed her head is in the game on the offensive end off too on a header inside.

The 2-1 lead, though, seemed to have the Tuskers back on their heels and had them playing hem in the home team after the break.  That was until Ramsey found a little space beyond the midfield sideline and made the most of Melina Couzis’ step on the defense. Teeing off on the centering pass, Couzis had Jahn clearing her net out for a third time with 19:38 remaining in the game.

Not letting up, Somers had another chance to break open the game seven minutes later.

Off a corner kick by Kurtz, Mensi went heads up again, and the Tuskers were poised to celebrate. But this time Jahn came up big with a diving save to her left

Even so, the game still seemed in hand until Georgia Mraz took an outlet down field and got behind the Somers defense on the right side of Jockimo. Trailing the play, Tiso was called for a tripping penalty - leaving Mraz embedded in the turf and the John Jay crowd unamused at the indent.

Mraz didn’t take it personally, and her penalty kick made the crossbar sing for John Jay this time.  Only Grace Vittoria turned the rebound into music with 5:41 remaining, and suddenly Somers found the curtain wasn’t coming down without a little more drama.

But Somers kept the pressure up on both ends. The final push by John Jay ended as Mensi and Kurtz got the ball moving out of the Somers end and Lucadamo received at midfield.  Straddling the sideline and her defender, she took possession and got the ball ahead to Jenna Menta who cleared downfield.  From there, Somers easily ran out final two minutes and held down their real estate for good.

TAGS : Soccer Somers John Jay
Let us know how you like this article. Like it and Rate it below.
248 0
0
Thanks for rating this article
0 stars - by 0 user(s)