Somers Routs Yorktown to take Section One, Class A Title 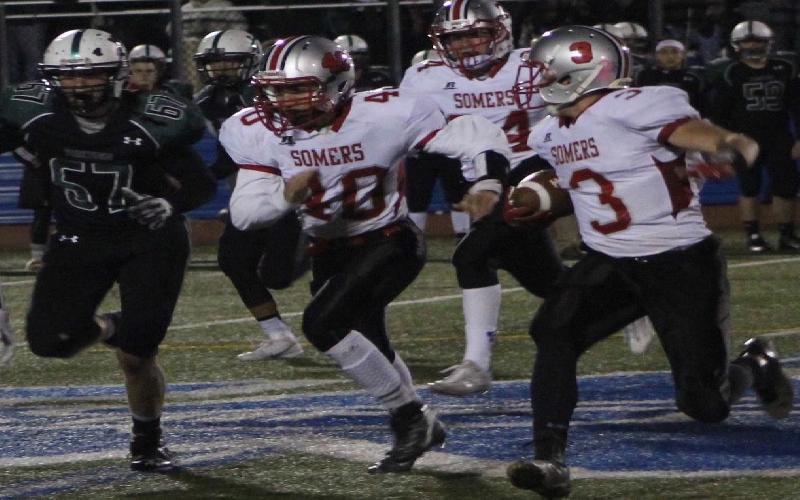 Coverage of Section One, Class A Title Game in Mahopac, NY

Earlier this year Somers and Yorktown faced off as undefeated Class A powerhouses. Both teams battled up and down the field before the Huskers pulled away in the final minutes. So a packed house at Mahopac High School had to be sitting in wait of another titanic struggle. But the Tuskers clearly suffered a memory lapse and gave the Huskers a stinging 42-6 defeat that they may never forget.

The game, though, began rather unassumingly for Somers. In fact, two runs by Messiah Horne stepped Somers back a yard and seemed to give Yorktown an early leg up.

But Matt Pires took a sideline kick out in front of the home crowd and once again had a bewildered morass of defenders giving chase.  The call from the bench not very fancy, QB Kevin Olifiers found Pires on the screen, and in refusing to go down, opened the space he needed to get creative.

This let sideways do his real dirty work and paused the secondary as he began his signature cut across the field.  The bleachers shifting on the juke, the Somers crowd had no problem signing off as Pires cut back and put the 68 yard touchdown celebration in their corner at 9:55 of the first.

Nonetheless, the uproar failed to get to Brandon Meyreles and had the game on script.

Taking Kevin Graber’s squib on a bounce, the running back burst through the  Somers coverage and was finally pulled down on the 23.

Eric Hagenah and Jack Gilroy didn’t wait long to let Yorktown know that the defense also had a case of amnesia.  A roll left and one right had Husker quarterback Jose Boyer on the run and on his back twice.  Yorktown would turn the ball over on downs after Thomas Tooma brought down Brett Makar at the 24.

Yorktown definitely got more time to think on the next Somers possession but still yielded another appealing Pires close up for the Tusker student body.  A personal foul by the Husker defense would pave the way.

After Olifiers came up incomplete to Pies on the far sideline, a late hit gave the Tusker drive life at the Somers 37. More than ready to exhale, Horne took the cue and got Somers to the 12 on runs of 13 and 18 yards.  Pires then showed he didn’t need his hands to make the most of his legs.

The play breaking right, Olifiers handed off to Pires in motion, and the home corner again got cozy with its favorite receiver.  But the undefeated Huskers had in Makar a receiver who could definitely keep pace with his counterpart.

Unfortunately, his elusiveness could not outmaneuver the game’s turning point. Following a 68 yard screen play to Makar that eventually set Yorktown up at the nine, Yorktown’s shotgun went awry.  The snap hit the receiver in motion and Somers recovered.

The half’s scoring would end again on the heels of Pires. Olifiers bomb into the end zone was intercepted by Cameron Gironda, and it was Pires who ran down the harried 32 yard return.

The game still well in reach, the shoe would be on the other foot again as CB Vincent DiFilippo employed a few moves to rival Pires.  At third and 10 from the Yorktown 37, Boyer briefly had a man open in the flat. But DeFilippo stepped in, and angling for the far sideline, had Somers only 27 yards away.

Not nearly enough room Yorktown to slow down Horne’s methodical thunder and deny Olifiers the keeper that extended the lead to 21.  A three and out for Yorktown and 13 yard punt would be no help either.

This left Horne to go up the gut again.  Two bruising first down runs through the line and Yorktown had no answer as Horne went 21 yards for a 28-0 lead with 4:04 left in the third.

The final 16 minutes nothing more than a formality, Pires and Horne wiped clean the slate with a 55 yard punt return and 60 yard run from scrimmage.

Section One Championship to Somers and no looking back.

TAGS : Somers Yorktown Section One
Let us know how you like this article. Like it and Rate it below.
596 0
0
Thanks for rating this article
0 stars - by 0 user(s)

Coverage of Section One Soccer Final at Lakeland High School.

Jon Clune And Matthew Grippi Advance To Final Rounds Of

Fox Lane Comes Away with Two Advancers in Section One Tournament.