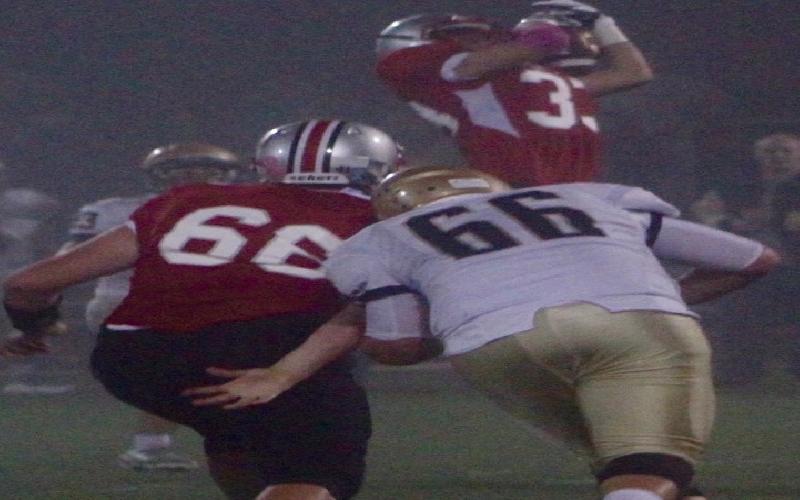 Section One, Class Coverage of Somers 28-14 Victory over Lourdes

The Tuskers found themselves on unfamiliar ground at home last night in the Quarterfinals of the Class A Playoffs.  They trailed 6-0, and the hovering fog did not obscure the Warriors from setting their sights on a two score lead with the goalposts just ahead. But Somers held on the goal line and then scored the next 21 points - leaving Lourdes not knowing where they were before falling 28-14.

Opting to kickoff, Somers set up on defense off John Wagner’s return to the Lourdes 44.  Two runs by Joe Scaglione got the warriors across midfield to the Somers 44, but the drive seemed stalled.

Facing a third and 12, QB Nick Gastin let fly down the far sideline. Tight End Corey Mulalley turned on the jets and ran under Gastin’s loft. He then barreled through safety Andrew Cassin as the two converged just after the point of entry, and Lordes had a 6-0 lead at 9:39.

Somers at first took the six in stride. Vincent DiFilippo covered Germaine’s squib to start the Tuskers at the 40, and Messiah Horne got Somers on familiar ground by fighting for his first seven yards.  Unfortunately, Somers found themselves going the other way after Tyler Carr fumbled at the Lourdes 45 following a 15 yard screen play.

The six the Somers defense yielded this time only got the Warrior across midfield, and Lourdes was forced to punt.

Once again, though, Somers didn’t let midfield work in their favor after the Tuskers got a glimpse on the soles of Horne and Olifiers' feet.  Opting for air, Olifiers had Pires across the middle, but Mulalley ran intercept and changed Somers flight plan again.

A personal foul put the ball at the Tusker 39, and Lourdes was poised to poke another hole in the home team’s doughnut. A fourth and six looked like a reprieve, but Mulalley’s diving catch on the near sideline kept the Warrior drive baking at the 24.

A Mulalley reception earned another first down at the 14, and Scaglione’s short yardage gain  gave Lordes first and goal.

But when Daniel Venditto knocked Sean McDowell into the backfield and Gastin’s third down pass fell incomplete in the right corner, Lourdes set up for three.

The optics obviously off under cover, the thud off the right upright came in clear as day. Somers still trailed by six, and the offense took the cue with 9:16 left left in the half.

Gaining midfield on the short passing of Olifiers, a Somers fourth and two showed no signs of oscillating over playing the field position game.  Horne took the handoff and made the Lourdes front line look as porous as the 44 yards of mist the running back sliced through.

Tyler Carr would close the half at 7-6 by intercepting Gastin on the Lourdes 21.  But the low score didn’t knock Somers off their game.

Lourdes was quick to get the message the Tuskers have been sounding all season… Give the ball to Horne, if the thunder doesn’t get you, the lightning will.  Save a few keepers by Olifiers, this time Horne mostly bruised his way through the Lourdes line, and they stood no chance as he scored from the five with 6:48 left in the third.

The Warriors, though, did have a response. Fielding the kickoff, the upback flipped back to Gastin, and he lateraled across field to Kyle Delaney.  80 yards later, Lourdes trailed by 2.

Unfortunately for Lourdes, the officials also had a say, and the Warrior sideline didn’t have too many kind words as the lateral was declared forward.

After going quietly on the possession, Horne went back to work.  More of the same, this time the senior scored from the seven with 11:01 left in the game.

Like the fog, though, a 15 point lead did not provide enough cover to send everyone home just yet. Scaglione got the ball past midfield and several passes down field to Mulalley had Lourdes 20 yards away.

A pitch to Kenny Rogan brought Lourdes to the seven, and Gastin’s fake reverse poised everyone to the edge of their seats in wait of the two point conversion.  Once again it was Mulalley. The wide receiver went high over the Somers defense and got Lourdes within seven at the the 4:48 mark.

Midfield again came into play as Somers faced a third and nine.  On this turn, Somers sounded the horn on the legs of their quarterback. Olifiers took off for the far sideline and dove just ahead of the first down marker.

And if any doubt remained, the Somers Horne always ready to go off sent the Warriors into the darkness with a 35 yard TD run.

TAGS : Somers Football
Let us know how you like this article. Like it and Rate it below.
330 0
0
Thanks for rating this article
0 stars - by 0 user(s)

Australia Win Back The Ashes

The Ashes always generate interest. This time all the plans of England came to naught as they have lost the first three tests and in a five-match test series it's all over bar the shouting.