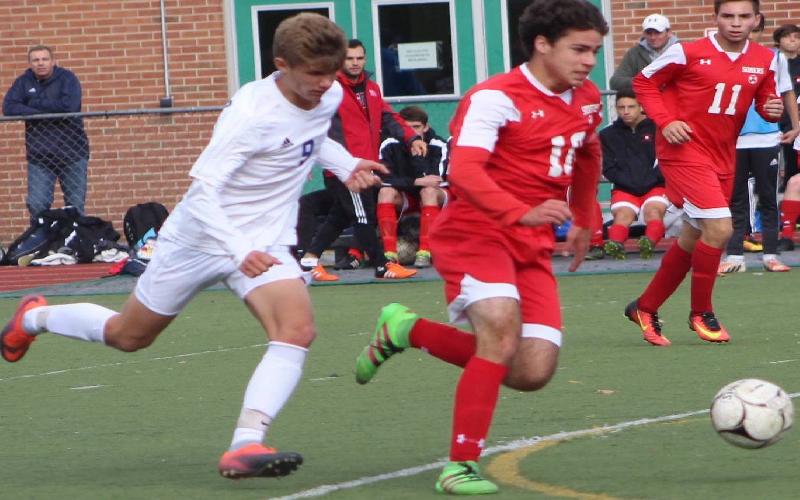 Coverage of Section One Soccer Final at Lakeland High School

On Saturday afternoon, the third seeded Somers Tuskers took to neutral ground at Lakeland High School for the Section One, Class A Soccer Final versus the top seeded Pearl River Pirates. 86 minutes passed before either side gave any ground as each team thrilled on equal footing. But it would be the Tuskers who literally put their heads together and got the game’s only leg.

It didn’t take long, though, for Pearl River to dig in their heels and give the Somers defense a look at the footwork they were in for. Craig MacDonald took a throw to the right of the Somers goal and briefly elevated the Pearl River faithful from their seats as the ball soared over the crossbar.

Following a few routine chances for both goalies to get their feet wet, Jack Maher returned MacDonald’s favor, and it was the Tusker fans who had mixed feelings as the midfielder sailed one over the crossbar following a nifty steal at midfield.

The Somers defense would raise the bar and get Somers on goal next.  Alex Piazza and Evan Kieltyka did a two step at midfield to reverse a Pearl River rush, and Piazza definitely got Dolan Ocasal out of his comfort zone to make the long save.

Moments later, Ocasal got the long view again as he had to be content with looking the ball just wide off Graham Roediger’s foot.  After receiving from Piazza, Roediger's determined footwork split the defense and got him enough space to give the Somers crowd another gasp with 18:30 left in the first.

The Tusker side, hardly having time to catch their breath, skipped a beat as MacDonald picked Luke Begoni’s pocket to the left of the goal and found Kevin Dooley at point blank.  But Kurtz came up with the short hopper and allayed the arrhythmia that momentarily shook the bleachers on the Somers side.

Following more good work by Roediger that yielded another shot on goal, Kurtz got the crowd up again as Pearl River diligently worked the goal line.

The Somers goalie went high among the morass of heads to cut off the horizontal that Patrick Kennedy drilled from the corner and kept the score knotted with 12:15 remaining in the half.

Up the field more good defense by the Somers kept the status quo.  As Dooley was breaking with a wing in wait, Brandan Blanch put the stops on the Pearl River Midfielder, kept his composure as the Pirates converged and let his footwork do a number on the would-be advance.

Pearl River would register the last shot on goal of the half with 6:50 remaining. MacDonald got it into Francesco Galvano, but Kurtz easily handled the shot and it was nil the rest of the way.

Somers didn’t have to wait long for the Pearl River forward to stir things up after the intermission, though.  With space to the left of Kurtz, MacDonald got a good look but the long leg of Blanch made some pretty exciting optics too as his split played denial on the shot.

As such, the Somers offense took the cue and began applying the screws.  Maher and Faigle seemed to be everywhere on offense, while Somers defender Alex Elconin kept Pearl River under the gun with his midfield play.

But pressure still didn’t translate into an advantage, and when Faigle found Maher’s head to the left of Ocasal, Somers could only throw up their hands as the set up went off the post.

Of course every time MacDonald danced on his sideline, the second half dominance by the Tuskers set poised send Somers up in smoke, and his corner kick with 15 minutes remaining nearly set the field ablaze.  Fortunately, the ensuing Pearl River header inadvertently went off one of the Somers defenders, and Kurtz was able to cover.

Undeterred, a Somers penalty at midfield provided the final juxtaposition.  The free kick had Bugoni going heads up above the crease and Maher made two headers better than one in getting the ball to Max Grell across midfield.

Then as the Pearl River defense seemed in position to neutralize the Somers Midfielder, he nudged the ball to Andrew Lasher off his back foot, and the Forward raced for an angle to the left of Ocasal

The crowd more than ready to exhale, Lasher crossed Dolan for the right side of the net and was next seen after disappearing under a stampede of Tuskers.  Emerging unscathed, he and his teammates killed the final 3:57 for the championship and shot at the States.

TAGS : Somers Section One Soccer Pearl River
Let us know how you like this article. Like it and Rate it below.
561 0
0
Thanks for rating this article
0 stars - by 0 user(s)

A great way to pedal your way to fitness is cycling regularly. In recent years the popularity of cycling as an activity has increased tremendously.