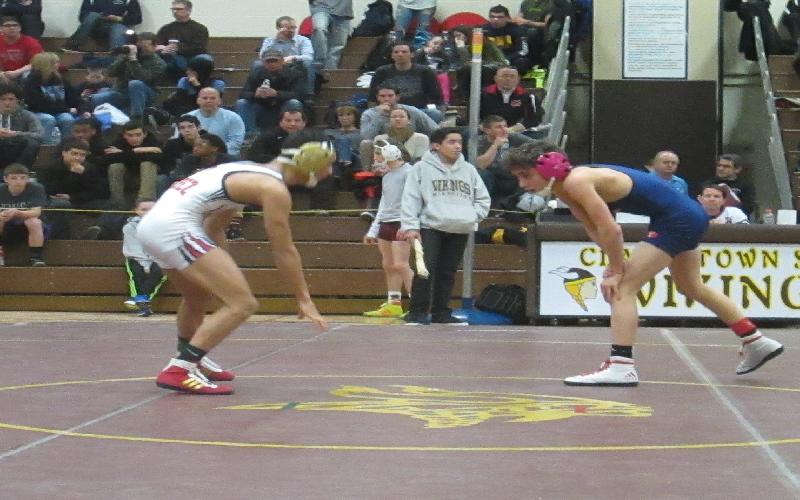 Luca Errico and Devon Cummings are probably about as far apart as two wrestlers can get. Errico is a 99 pound, 8th grade phenom and son of a state champ. Devon is a 182 pound senior who didn’t start wrestling until his sophomore year and joined as means to compliment his lacrosse play in the offseason. Luca may someday be a state champ. Devon, on the other hand. will contribute to his team’s success in any way possible – earning their respect through toughness and perseverance.

But they definitely have one thing in common, said Coach Jim Ardizone following the Tiger Tournament in Mamaroneck.

“Wrestling isn’t for everyone and stepping out on that mat by yourself takes courage,” said the first year coach.

Even so, the eighth grader was not necessarily impressed with his 3rd place finish after a 9-5 victory over Nick Florin of Pine Bush in the consolation round. On the other hand, Errico did acknowledge a big improvement in his semifinal loss to Mike Killard of Wantagh. “He was section 8 champ last year, and I came a lot closer than when we met last year,” said Luka.

The 8-0 lead Killard compiled seemed like more of the same. That’s until Luca saw an opening and got on the board in a flash with a single leg takedown. Soon enough, Killard was on his back and Errico was within three.

In the end, though, Collard proved too much. Introducing Errico to the ceiling one last time, the ultimate second place finisher would register the fall with 17 seconds left in the third.

The dull glare of a bronze medal was still worth noting for his coach. “Luca is our most dedicated wrestler, and will continue to improve if he keeps doing what he’s doing,” said Ardizone.

A little more shine on Devon’s silver medal, Ardizone still felt his 182 pounder needs to sure up on his technique. “We have to get rid of some of his bad habits,” said Ardizone.

Pinned quickly after a failed takedown in the opening minute of the finals to Sean Peet of Glen Cove, Ardizone found room for praise in Devon’s semifinal win. Unable to get on the board through two periods, Devon’s 6-0 deficit to Pine Bush’s Nick Kolmel had only one road to the final.

Seemingly stalling in the bottom position, Kolmel attempted to ride the match out for a decision. But Devon refused to comply. “He seized the opportunity and took advantage,” said Ardizone of Devon’s third period pin in the final minute.

If you're looking for photography or game coverage in Byram Hills, I can be reached on Facebook or at Rmonetti@aol.com

TAGS : Byram Hills Armonk
Let us know how you like this article. Like it and Rate it below.
593 1
1
Thanks for rating this article
5 stars - by 1 user(s)

5 Reasons Why Ronaldo And Messi Should Not Be Compared

In this era of football decorated with the likes of Ronaldinho, Zidane and Kaka, 2 players have made the cut, or in other words, proved themselves to be better and best in every aspect of this loved sport. Cristiano Ronaldo and Lionel Messi.