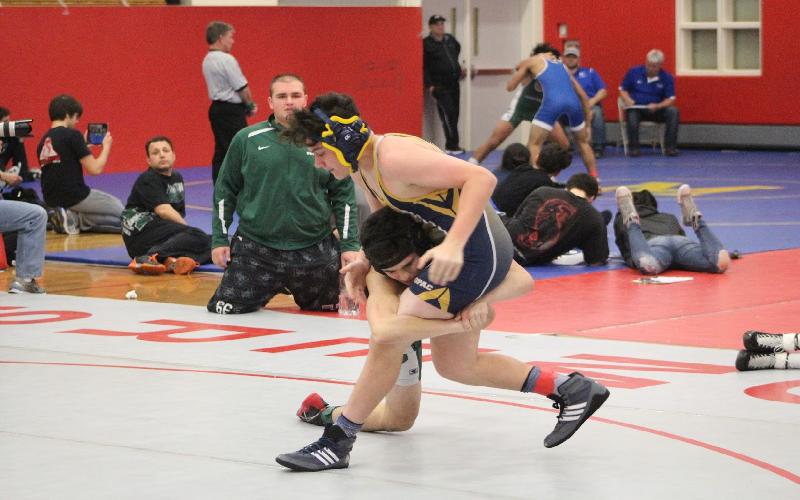 Fox Lane Comes Away with Two Advancers in Section One Tournament

On Saturday afternoon, the first two rounds of the wrestling sections were held at Arlington High School. The Foxes arrived with five and will take two into the semifinal round at Clarkstown South High School on Sunday.

132 pounder Matt Grippi won an 8-0 decision over Julio Cruz of White Plains to earn a berth in the semi finals. In addition, Jon Clune at 195 pounds refused to give in to early deficit in the quarterfinals to extend his season at least one more day. “Matt just grinded his victories out, and Jon showed a lot of toughness by coming back and winning,” said Coach Anthony Rodriguez of Fox Lane.

Otherwise, 182 pounder Arben Gecaj and 282 pounder Alejandro Lopez-Vega failed to get out of the first round. But Matt Witz’s first round win did gain him a chance to wrestleback for third place after his quarterfinal defeat. Scoring three single leg takedowns in the first and second period against Seth Vieira of Somers, Witz almost immediately surrendered a one point escape each time.

He admitted afterwards that his opponents proficiency from the bottom led him to not prioritize riding Vieira from the top.

As such, Witz used his own advantage on his feet to score a 6-5 victory. “The strategy worked,” he said.

The 160 pounder, though, was pinned in the second round of wrestle backs. The defeat ending his season.  Proud nonetheless of his third place finish in the divisions last week to earn a spot in the sectionals, Witz is looking forward to next year.  In this, he spoke for any wrestler who’s ever had his or her hand raised in victory. “Wrestling is different, because you wrestle as an individual and when you win - you win,” said Witz.

Clune and Grippi are hoping there’s more of that on Sunday.

TAGS : wrestling fox lane bedford
Let us know how you like this article. Like it and Rate it below.
205 0
0
Thanks for rating this article
0 stars - by 0 user(s)