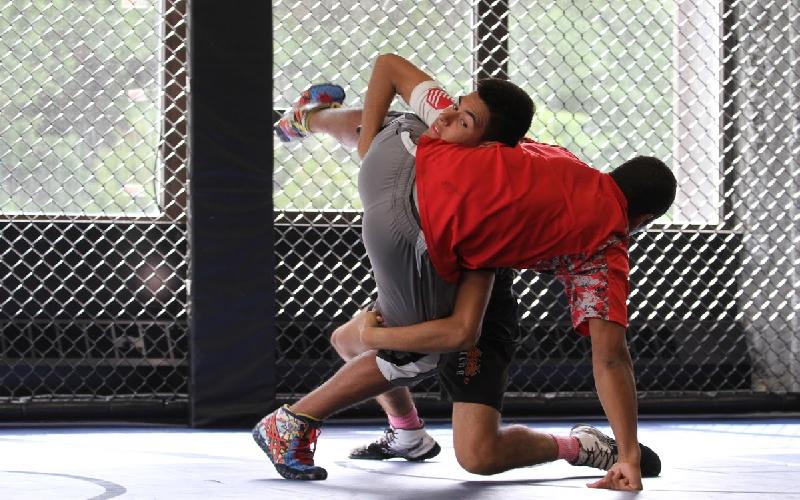 Armonk wrestling club goes all in for Wrestlers of all shapes, sizes and abilities.

Wrestling takes tremendous commiment, and coaches love kids who are always ready to throw down. On the other hand, overdoing the commitment can induce a burn that leaves mat progress on the outs. “Sometimes you have to keep the kids out of the room,” says Grant Paswall of GPS Wrestling. But summer over, Paswall has his preseason program ready to simmer and bring its wrestlers to a boil for the 2017-18 school year.

“The kids we’ve been training all year are coming back and can see the light at the end of the tunnel,” said Paswall. “So we’re excited to get them ready to go.”

This year is a little different than the previous two, though. His 100 or so wrestlers had occupied a space across the street, but not enough elbow room forced a change of address last February.

“We were busting out of the seams,” said Paswall.

Five months later, the location at 100 Business Park Drive has them more than stitching it together. “This is not only one of the best wrestling facilities in the county but in the country,” he says of the 4300 square feet space, which has free weights, a sauna and a waiting room for parents.

The best amenity, though, is that the name on the dotted line is meant to feel like it belongs to the kids. “It’s just been a really cool atmosphere as far as them being able to call it their own,” says the Somers Wrestling Alum. “They don’t just come to practice and leave. They hang out with one another before and after. So it’s theirs, and that has had an awesome affect.”

But it isn’t ability that nurtures the club’s camaraderie. “Our motto is good people first, good wrestlers second,” said Paswall.

Nonetheless, the University of Illinois Grad takes pride in offering plenty of latitude in defining the latter good. “The club caters to all skill levels and age - not just the tippy top,” says the Mahopac resident.

The mindset then can provide an outlet for the kid who can’t find a home on the varsity level. “I believe with weight categories and the one on one aspect, you have control of your own destiny,” he says. “You can be as good as you want to be.”

So GPS stays local with nearby tournaments and dual meets. On the other hand, when it comes to the top tier, GPS goes all in.

Paswall can point to the Cadet National Championships in Fargo, North Dakota as proof. All five of his wrestlers won at least one match in the toughest tournament in the country, and one fell just short of the top pedestal. “Jack Logan took second,” said Paswall.

Even so, Paswall doesn’t elevate the victories above the nuts and bolts. “The intangibles are far more important than getting your hands raised at any give time,” he said.

This means GPS makes sure their first floor locale isn’t the only thing building from the ground up. “It’s more than the basics, but doing the basics right,” he says.

But whether upright or on a roll, Paswall puts one precept above all the others. “You can’t do something like this without enjoying it,” Paswall confirmed.

He was sure to make that clear to Jack Logan as the finals descended on him. “Remember why we do this,” Paswall drove home the point.

At the same time, Paswall appreciates that he isn’t the only voice in the room. Between coaches and parents, he says, “I’d be lying if I said I was doing this all myself. There’s quite a team working behind the scenes.”

Of course, having only room enough for one on the podium doesn’t diminish the satisfaction for the numbers behind the successes. “A lot of people help them get there,” he said. “That’s why it’s so special.”

As a result, the contingent can’t help but double down. “It encourages us and motivates us,” Paswall asserted.

However that’s not to discount the bigger picture, and the mark wrestling leaves behind through hard work, commitment and perseverance. “It’s with you forever, because once a wrestler, always a wrestler,” he concluded.

TAGS : wrestling armonk
Let us know how you like this article. Like it and Rate it below.
1.65K 1
0
Thanks for rating this article
0 stars - by 0 user(s)