5 Reasons Why I Love the FIFA World Cup 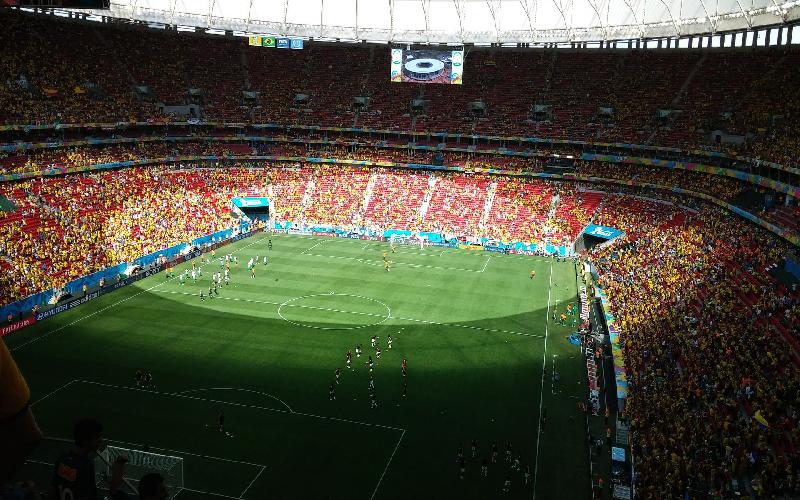 Every four years football fans are spoiled for an entire month with a fabulous tournament that offers them loads of excitement and entertainment: the time has come to enjoy the greatest sporting event on Earth, the FIFA World Cup!

28 years ago, in June 1990, I was enjoying for the first time in my life the broadcasts from the most prestigious competition of that year, the FIFA World Cup from Italy. It was an experience that I would go through every through every four years until the present day when the 21st World Cup is about to start in Russia, and even throughout all these years I have watched thousands of matches in all sorts of competitions, nothing compares to the anticipation and eagerness I feel whenever the four-year cycle ends and the elite of global football gathers once again to establish which nation will conquer the world title. Here are 5 reasons why, although there's so much football nowadays on TV and other gadgets and it's broadcast almost all year long, I still love the FIFA World Cup as much as I did back in 1990:

1. The FIFA World Cup is the tournament which best exemplifies the global spread of football.

Nowadays almost every country on Earth, no matter how small, has its football league, and from this point of view, no other sports can come even close to football. This dynamic and fascinating game has become a universal language which almost everyone on our planet can understand and the World Cup represents the ultimate expression of this bond between people of different races and continents who share the same passion for the beautiful game.

2. It is the perfect stage for great players to acquire legendary status thanks to a few brilliant performances.

Many of history's great footballers, such as Cruyff, Pele, Maradona, Zidane and so on, may have achieved a lot of great things when playing for their clubs in national leagues and international cups, but their fabulous evolutions during the FIFA World Cup tournaments have turned them from high-quality players into Gods of football.

Their exploits at the World Cups will certainly represent the main reasons for which they will be remembered and celebrated as long as there is football on Earth!

3. Winning the World Cup is the ultimate reward for players and coaches, there simply isn't a more precious trophy.

A world-class player has many chances to win a national or even an international club competition because these events usually take place on a yearly basis, but he may have only four or five chances to become world champion in his career, l so he should be able to compete at the highest level to make his dream of winning the ultimate prize in football or at least to be considered one of the best players of that edition. After a disappointing evolution, he will have to wait for another four long years for another shot at glory!

4. The World Cup is one of the most unpredictable competitions in football, and minnows often succeed in reaching its advanced stages.

It's true that the level of play in the World Cup can no longer match the one we can enjoy in the Champions League, but the competition is a lot more balanced. While in the Champions League smaller teams are usually thrashed by giants in the group stage and only a handful of teams, in which the valuable players are concentrated, reach the final stages, again and again, things are a lot different in the World Cup. If we look at its more recent editions we can see that less fancied teams like Senegal, Korea Republic, Ghana or Costa Rica were able to reach the quarterfinals or even the semi-finals of the competitions and caused great headaches to the European or South American powerhouses who eventually managed to stop them. It's a tradition that is very likely to continue this year and I'm really curious to see which team or teams will surprise us in Russia.

5. Thanks to the media and the Internet fans who can't afford to see it the World Cup live can experience it almost as if they were there.

The ideal scenario is to see at least once in a lifetime a football match at the World Cup from inside the stadium where it takes place, but unfortunately, many of us will never have this chance. However, we can live the tournament at a great level of intensity from the comfort of our homes and we can communicate with other fans on social media, and why not, we can watch the games with our friends in pubs or wherever else we can, and thus we can feel really good  and enjoy the show for a whole month. We must never forget that after all football remains a game whose mission is to entertain us.

These are only 5 of the reasons why my enthusiasm in watching the World Cup hasn't diminished a bit since that first tournament I watched in 1990. From now on let's enjoy the big show with all its drama, passion, great goals, unique misses, sadness and joy and whatever else it may offer us. May it be the most spectacular World Cup ever and may the best team win the supreme title in world football!

TAGS : FIFA World Cup national teams drama excitement passion world champions
Let us know how you like this article. Like it and Rate it below.
110 1
0
Thanks for rating this article
0 stars - by 0 user(s)