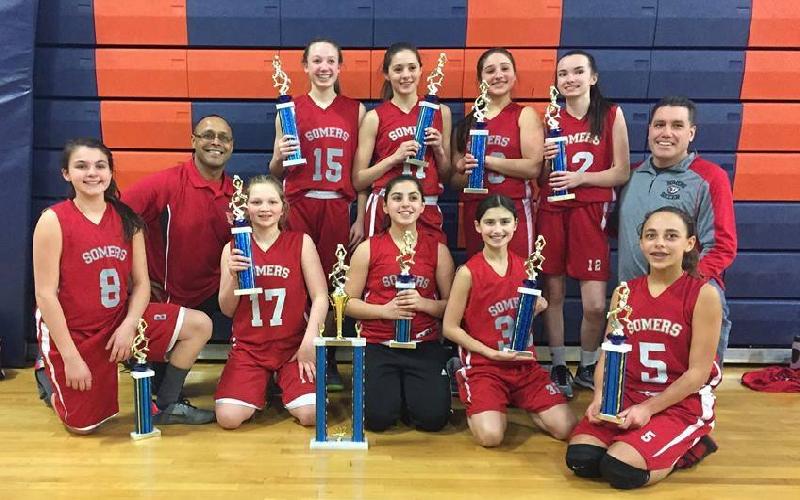 The Somers 7A Girls Tuskers basketball team could attribute its up and down season to not having key players available at a number of games.  But the resulting 7-7 finish had an upside for the 4th place finishers once the playoffs came around.  “It forced the bench players to step up and gave them confidence. So when the tournament began, we knew we had a team that would give any of the top teams trouble,” said Coach Robert Hawkins, and he was right.

On Saturday afternoon at Horace Greeley High School, the Somers Girls defeated two seeded Byram Hills by a score of 42-20 to win the Tri-County Basketball League.

Sandwiched between a couple of baseline drives by Somers Amy Lasher, Alicia Hawkins opened the scoring on a short jumper off the backboard, and Julie Sirchia closed the first quarter with a three.  But the two first quarter points allowed proved the backbone of Somers playoff run.

Struggling in the first half of opening round game versus 6th place Mamaroneck, the Tuskers refused to go back on their heals and the third quarter began their stampede to the championship.  “Our defense turned it up a notch to force them to zero points in the third, and we coasted to win 30-18,” said Hawkins.

Ready to bust the bracket, Somers didn’t wait to give Harrison a good look at their bread and butter. “With tenacious defense, we stymied the top scoring Huskies to only one point in the first quarter and went into the half with a 15-4 lead,” said the Somers Dad.

On the other hand, all the hard work did come at a cost. “Three of our starters had three fouls at the half,” he said.

This allowed the top seed to close to 22-20 to start the fourth. But now three of their starters had four fouls each, and as the period progressed, both teams had two starters a piece fouling out.

In other words, Somers was on familiar ground. “Our bench outplayed their bench, and we won the game 35-30,” said Hawkins.

The defending champs going down, the Tuskers were playing with house money.  “The girls felt like the championship was against Harrison, and win or lose versus Byram Hills, our season was a success,” he relayed.

The sentiment was on display in the pregame.

“Before the game, the team seemed extremely loose, and during warm-ups, we looked ready to play,” Hawkins said.

The seven point first quarter lead wasn’t the only advantage either. “We played aggressive on offense, getting one of their key players two quick fouls and holding their top scorer scoreless,” said Hawkins.

But after Lasher opened the second with another lay up, Byram Hills closed to 12-9 before Lily Carino went one for two at the line to finish the half with Somers ahead by four.

Carino didn’t take the stand still into the third quarter, though, and went coast to coast on a steal to get the second half scoring started. Still on the upswing, the seventh grader sunk two free throws after being fouled on an attempted put back and converted on a follow the next time down.

The 18-11 lead played perfect complement to Somers’ sneaker squeak tenacity. “We once again kept up the stifling defense and outscored them 17-3 to take a 30-12 lead,” said Hawkins.

Lily Carino leading Somers in scoring with 16 points, the rest was also old hat. “The fourth quarter was a culmination of our last few games. We were able to foul out there second best scorer and held her to only 5 points. Their top scorer (and arguably the best player in the league) was held to a season low 4 points. In addition, all of the bench players were able to get multiple minutes in the fourth to cruise to a 42-20 win and TCBL 2017 Championship, concluded Hawkins

TAGS : somers byram hills
Let us know how you like this article. Like it and Rate it below.
741 0
0
Thanks for rating this article
0 stars - by 0 user(s)