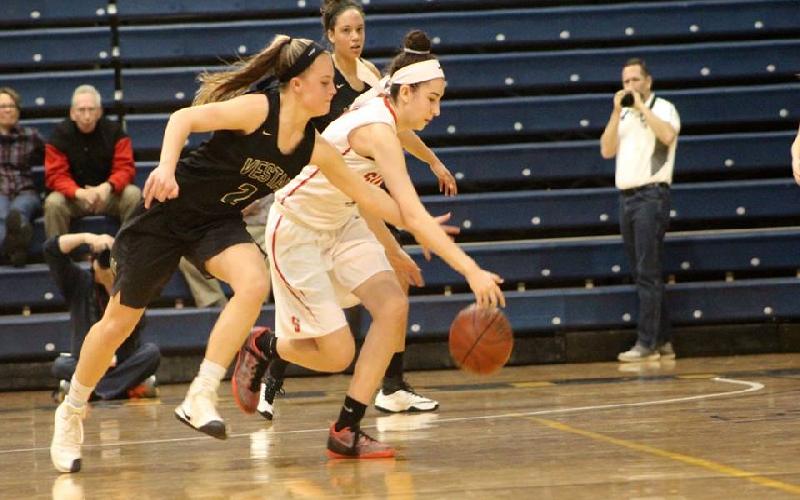 On Saturday at Pace University, Somers and Vestal played back and forth with the lead until midway through the third quarter of the New York State Regional Semifinal.  In stepped Somers’ top gun Hannah Angelini to finally upset the balance and begin busting the bracket for the Section One champs. She went off the dribble for Somers’ final fourth to tie the score at 27 and then drove the lane to put Vestal in back for good in the Tuskers 45-39 victory.

Somers would jump out to a 10-3 first quarter lead, though.  The Tuskers playmaking guard Danielle DiCintio was on point and got Somers going on all four field goals. The Freshman found Liv Lipski for two triples, shoveled to Angelini on a baseline drive and then got the ball moving around the perimeter to Jackie Penzo who hit Angelini in the paint for the layup.

But Vestal kept pace going inside and coming to a stop at the foul line.  Center Alani Gallagher sunk two of four, and Shelly Anderson converted on both her free throws to end the quarter with Somers up 10-9.

The second quarter would have the Tuskers giving chase to the Bears attempt to create some separation. Joanne Gaffney hit a corner three and Gallagher sunk two free throws on the attempted put back.

After Angelini hit two free throws, Gallagher got inside for another three point lead. But DiCintio got the dish on Vestal again when she found Lipski in the corner to tie the score at 15.

Vestal answered back with what would prove to be their biggest lead of the game.  Cortney Franz grabbed a long rebound for the coast to coast, and Amanda Fedor’s steal gave Vestal a four point lead on the break.

The lead would also be short lived, though.  DiCintio hit Jackie Penzo with a cross court pass, and the Tusker guard converted her foul shots off her baseline drive.  Angelini tied the score with 3:23 in the half when she bumped off her defender and made a run on the rim for a 19-19 score.

The regional semi-finalists stayed away the next three times down and traded triples.  Lipski sandwiched her long range plan in between Gaffney and Franz going deep for Vestal.  But Angelini had no intention of letting the Bears out of her sights, and her baseline drive yielded two for two at the line to close the half at 25-24.

Following another foul shot by Angelini to tie the score, Vestal took their last lead as Franz didn’t let go on a drive through the paint.  Taking the feed from Anderson, the Bear guard pawed the ball with both hands and underhanded her way off the backboard to a 27-25 lead.

Anglini’s game tying drive seemed to poise the back and forth to continue, but Lipski’s had other ideas and not from her usual long range post.  Two blocks on the same possession kept the Bears at bay, and while three offensive rebounds on the other end didn’t put the Tuskers in the lead, Vestal got a good look at what they were up against.

Angelini would do the honors moments later, and after Franz couldn’t convert on the lay up, the the Bears got lost in the dust .

Angelini grabbed the rebound, and her coast to coast put Vastel in the rear view mirror for good.

The four point lead still looked as close as it appeared, though. But a Lipski steal led to a short jumper by Faith Ferguson, and Angelini left the Bears in the wind again as she faked a three before burying a jumper with less than a minute remaining in the third

The eight point lead didn’t signal any quit in Vestal, and Fedor hitting a tear drop to cut the lead to 35-31 said as much.  The large Somers crowd got even more pensive as Penzo missed two at the line with 6:41 remaining in the game, and then the Tuskers got whistled for a shot clock violation.

The arena almost went over edge too as Fedor’s drive rolled off the rim. But Penzo didn’t shift in her seat and was now the one going coast to coast. Unable to convert, she did draw the foul, and one of two at the line allowed the large contingent of Somers fans to exhale.

Exchanging misses for the next two minutes, Somers had to settle for sighs as the air got thinner by the moment for Vestal.  But when Franz buried a three with 3:35 remaining, she breathed life into a possible comeback, and now Somers stood cardiac with Anderson on the line for two.

Unfortunately for the Bears, Franz skipped a beat by going oh for two, while Angelini didn’t miss a step with a little one, two on the dribble to get to the rim for a 38-34 lead.  The game went mostly out of reach after Franz was called for a flagrant two foul, and Angelini sunk both free throws to extend the Somers lead to 40-34.

A couple of inside baskets by Gallagher kept Somers from starting their celebrations. However the end was only a matter Angelini hitting her free throws, and up to the task, she sent her team north for the final four.

TAGS : Somers Vestal
Let us know how you like this article. Like it and Rate it below.
399 0
0
Thanks for rating this article
0 stars - by 0 user(s)