Somers goes to 2-0 with Victory over Sleep Hollow 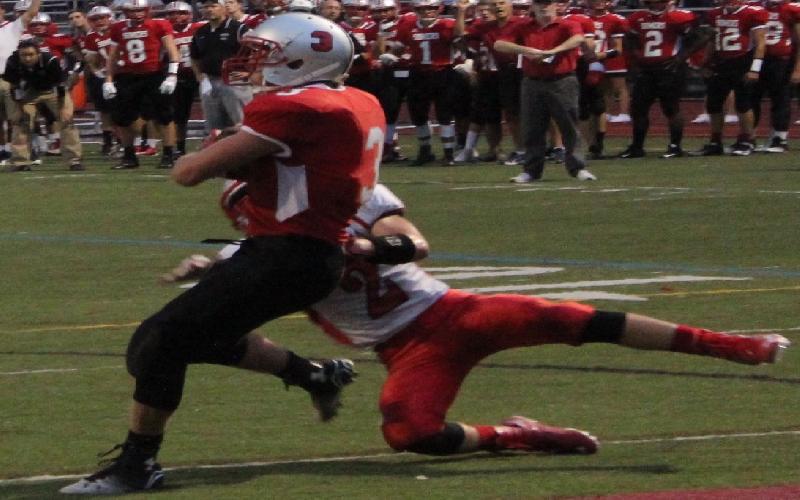 For the bulk of last night’s game between Somers and Sleepy Hollow, the end zone didn’t have a lot of company from the 70 or so players suited up at the High School. But when one breaks the plane four times, its more about the company you keep, and Wide Receiver Matthew Pires happily obliged to be on the receiving end in Somers 28-6 victory.

Following a three and out to open the game by Sleepy Hollow, Somers didn’t let their opening possession go to waste and Pires was soon positioned for his first score.   A screen to Vincent DiFilippo got Somers on the move, and Messiah Horn’s scamper across midfield to the 31 let Sleepy Hollow know they weren’t the only ones with horses in the barn.

A couple more runs by Horn got Somers to the 19.  Unfortunately, a holding penalty stalled the drive and the Tuskers were forced to settle for a field goal try from the 17. The attempt sailing wide left, the home crowd didn’t have to lean long on the disappointment.

A running into the kicker call gave Somers a fourth and one, and Coach Dematteo left the high step to Horn this time. Moving the line, the Senior RB gave Somers a first down at the nine.

As is were, a couple of no gains seemed to have Somers stalled again.

Seven yards out, a roll out by Somers QB Kevin Olifiers gave Pires all the clutch and opening he needed. The WR took the step, and Olifiers had the first of his three TD passes at 3:38 of the first.

The long drive, though, didn’t leave the Horsemen stuck at the gate.  RB Mike Lopez bulled his way toward midfield, and QB Sean McCarthy had a lot more than a stride to work with as Justin Torres’ broke free of the Somers secondary.

First and 10 at the 27, McCarthy hit Malik Jones over the middle, and Lopez then dragged the Somers defense to the two yard line.  However, a roll out and quick cut inside by McCarthy proved too much redirection, and the QB left the pigskin on the ground for Somers to recover.

Somers would give the ball back at the 11 with 42 seconds remaining in the first period.  Sleepy Hollow returned the favor again by giving the ball over on downs.

Still in a deep hole, Somers managed to take field position back.

On a third and nine from the four, Olifiers got the Tuskers back on its horse.  The Junior QB scrambled through traffic before being was pulled down at the 19.

Runs by Horn, Antonio Viera and DiFilippo got Somers past the 40 and a 23 yard run by Horn put Somers in position again.  But after a reception by Vieira at the 36, the Tuskers gave the ball up on downs at the 33.

A resounding sack by Somers DE Tyler Carr kept Sleepy Hollow from answering back, which set Pires up for a little double talk on the change of possession.  First taking a 36 yard reverse to the Sleepy Hollow 24, the senior wide receiver got the drop on the defense, and Olifiers' sideline pass took the high road for a 14-0 lead with 1:42 left in the half.

Somers receiving to start the third, Pires was ready for the hat trick.

He got an assist as Vincent Cartelli showed some hands of his own by cutting off Sleepy Hollow’s line drive kickoff at the 38 yard and returning 10 yards. Olifiers then scrambled across midfield and Vieira got around the corner for a first down at the 42.

But two consecutive illegal procedures pushed Somers back, and a third and eight had Sleepy Hollow poised to maybe turn a corner.  Pires hadn’t had his say yet, though.   Olifiers froze the defense on a roll right, and all the wide open Pires had to do was dash for pay dirt at 9:49.

After exchanging possessions, Sleepy Hollow got the ball back with 6:08 left in the third, and realized it was now or never on a fourth and five from their own 40.  McCarthy hit his man over the middle, and a flip to the outside receiver situated the Horseman at the Somers 38.

The home crowd definitely gave pause as several runs by Lopez and a Somers pass interference put the ball on the goal line. On edge and rolling right, McCarty’s fourth and one pass came up short ,and the Horsemen were broke.

Following a late 60 yard touchdown run by Malik Jones, all that was left was the photo finish, and Pires took care of that with a 43 yard punt return for a touchdown and the final score.

TAGS : Somers Football
Let us know how you like this article. Like it and Rate it below.
539 0
0
Thanks for rating this article
0 stars - by 0 user(s)