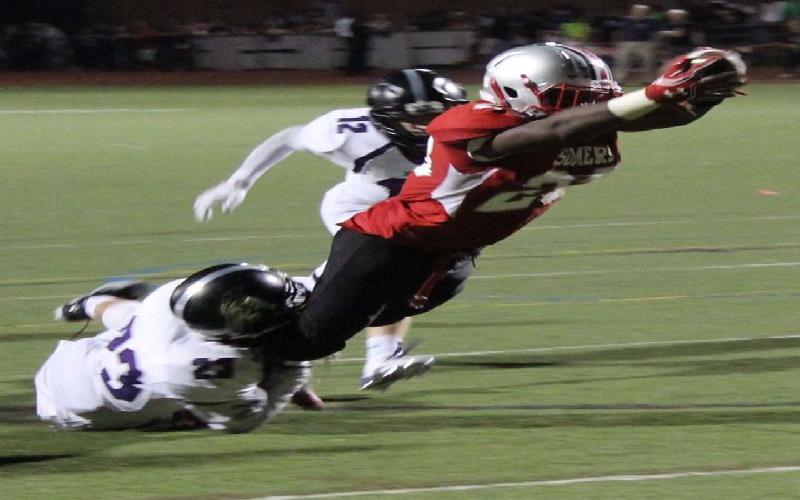 The four touchdowns Matt Pires scored two weeks ago against Sleepy Hollow looked liked something Tuskers would ever see on their turf again.  But Messiah Horne didn't wait long to best Pires' four score and John Jay fell well short on the sevens in the Tuskers 49-17 rout on Friday Night.

It didn’t take long for Horne to get John Jay thinking about returning to their home address either.  Receiving the opening kickoff at the eight, Horne exploded down the sideline in front of the home crowd, and before anyone could blink, the senior running back had Somers eyeing their first score from the four yard line.  A quick cut inside by Horne got Somers on the board, and the Cameron Pepe extra point had the Tuskers up seven only 18 seconds into the game.

Moments later, the homecoming crowd jarred the bleachers again as a Matt Lee screen got the right read from Somers Cornerback Jake Graham.  But he could not pull down what would have been six more.

Nonetheless, the crowd settled in after John Jay turned the ball over on downs at the Somers 42 and did not deter on Horne’s return fumble at the Somers 37.  No matter, John Jay looked as though they would make a game to it.

On the ground to Thor Adamec and several short passes to Dean Ford got John Jay first and goal at the Somers two. But the Indians could not go the distance, and a second down sack by Tyler Carr and Jack Gilroy forced the visitors to tee off at the 12.

Perry Shelbred’s 29 yarder got John Jay as close as they would get with 5:41 remaining in the first.  A margin that didn’t last past the next possession.

Somers QB Kevin Olifiers hit Carr on a screen to the right and danced the middle thirty yards to the Somers 45.  A wide open Vincent DiFilippo took the left flat to the thirty and set Horne up for his next score.

In between runs by Carr at fullback, Horne took the long and short of it. The halfback went nine yards to the 14 and finished off the final five on the far sideline for a 14-3 lead with 1:41 left in the first.

John Jay, though, did still exhibit a pulse on the legs of their QB. Hemmed in at their own nine at second and 16, Lee ran a sneak 28 yards, but another screen right went nowhere and pressure up front forced a John Jay punt.

John Jay wouldn’t get much time to think about keeping pace - Horne once again getting the Indians thinking of home.

He took the handoff on first down, raced 58 yards down the far sideline for his third touchdown, and Somers had a 21-3 lead with 11:49 left in the half.

Still Lee did not shrink before being turned away again. He hit Ford on the left for a 26 yard gain to the Somers 45 and then converted a fourth and one sneak to keep drive alive at the 34. But too much Somers pressure and rushed pass at the 33 forced John Jay into punt formation.

Sean Nolan’s leap into the end zone to pin Somers in at the three ultimately tallied to 97 yards, no problem for the Tuskers. A couple of runs by Horne and a facemask put Somers on the 50, and Tyler Carr played beneficiary of the set up.

Bulling up the middle with two hands securing the ball, Carr refused to go down and reached the end zone - leaving quite a following of defenders looking for something to hold onto.

But John Jay didn’t wait for the respite halftime would offer in the 7:49.  The Indians got a pass interference call that brought them across midfield, and Lee took to the far sideline for a first down on the Somers 15.

Seeming poised to stall again, Lee opted for the soles of his feet again to take matters into his own hands. He faked the handoff outside, then snuck up the middle to convert on third and twelve and narrow the score at 28-10.

Unfortunately for John Jay, they wouldn’t get the chance to take momentum into the locker room, and the finger of blame once again pointed to the same cleats. Vieira provided the set up this time by getting Somers past midfield, and Horne would do the dragging of John Jay defenders.  First to the 18, then to the eight and finally over the middle for a 25 point Somers advantage.

A half to play, Somers cruised to the victory. But the crowd still got to its feet when Olifier hit a wide open Pires for a 60 yard TD play and Horne closed his one man scoring outburst on a short TD pass on the goal line.

The running back’s night complete, the homecoming crowd gladly took the send off.

TAGS : Somers Football John Jay
Let us know how you like this article. Like it and Rate it below.
268 0
0
Thanks for rating this article
0 stars - by 0 user(s)