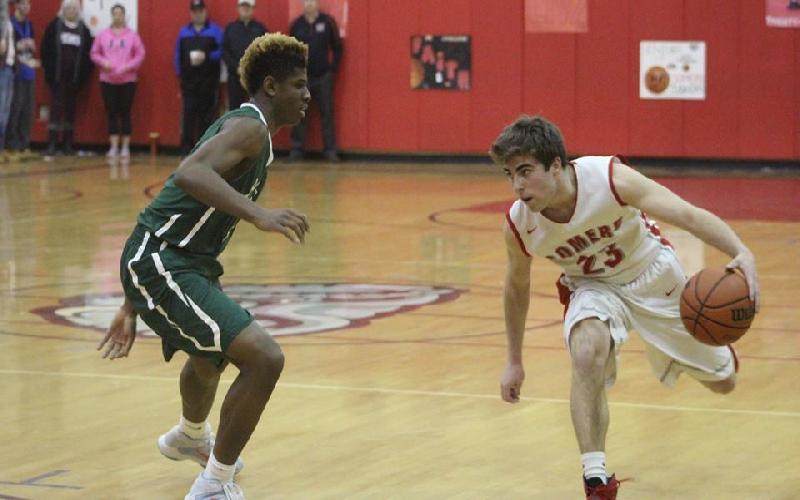 Coverage of Pleasantville’s 58-55 Victory over Somers

Last night at the high school, Somers played catchup from the outset, and an early 10-1 deficit, turned into 38-23 third quarter Pleasantville onslaught. But a 15-0 Somers run drew the Tuskers even, and Senior Night seemed poised for celebration.  Unfortunately, three late threes by Quentin Lupo proved too much for a comeback as Matt Pires' near miss at the buzzer ended a night to remember.

The same could be said for Pleasantville’s Mike Manley as his three pointer warranted a whistle at his 1000th career point (and a nine point Panther lead).  Matt Pires didn't allow the circumstance or stoppage to get him off point, though.  Lorenzo Bicknese sunk a deuce off Pires' penetration and then the senior guard made the most of Gio Tradito’s kick out above the arc.

In between another swish by Pires, Pleasantville’s prolific duo had Somers thinking twice again. Manley went coast to coast for two and Lupo sunk a three to double up Somers 16-8 at quarter’s end.

The  teams began trading baskets at the outset of the second as Lupo chased down a loose ball and Jeremy Stone converted a easy lay up extend to 18-8. Somers kept pace as Lucas Fecci found Pires for three more and then took for the hoop as the Panthers left him the baseline.

Manley put aside the lapse and took his own opening to the rack, but the Panthers would ultimately one up the back and forth to close the half. Lupo converted free throws as Manley found him on the break, and Lupo followed Manley’s miss to set the intermission at 27-18.

The duo came back in no mood to stay on an even keel with the Tuskers, though.  Manley hit a three, and after Somers center Nick Gargiulo hit two free throws, Lupo hit two more triples to extend the lead to 36-20.

After Bicknese hit a three at 5:10, Somers still looked like they would still be run out of the gym at 38-23. But Fecci’s coast to coast began the way back.

Pires first took the hard road by taking a charge on Lupo and then the high road with another three to get Somers back within eight.

Following a Lupo miss, Pearse Martin hit a three, and Somers edged within three to close the quarter.  Again turning defense into offense, Fecci got the steal at half court and Pires converted an easy layup for a 38-35 deficit.

Somers would finally pull even on the heels of another Pires drive 6:30 remaining. But Lupo made sure Pleasantville would not look back. After hIs short jumper put Pleasantville up two, Somers must have felt that the game was on rewind.  Three times down Manley brought the ball up, and three times he found Lupo in the corner for nine more points.

Nonetheless, Pires shook off the Deja Vu and got the scoop on a spin move that wowed the home crowd. Manley answered back with a little stutter step on the break and the visiting crowd happily had their say.

At 52-45, a hesitant airball by Marc Maestri looked to have Somers off the rails. But when the full court forced press put the ball back in Maestri’s hands at the top of the key, the senior didn’t miss a step in charging to the hoop for a layup.

A turnover on the other end sent Somers on the break, and Pearse Martin set Fecci for more theatrics.  Cutting under the basket, Fecci applied the proper english, and his reverse layup sent a message that the game was far from over with 64 seconds remaining.

But a reprieve came moments later as Chris DiCintio was whistled for a ticky tack foul thirty feet out.  Manley hitting the foul shots, the game seemed in hand at 54-49.

Still, Somers would not die. After Tradito came up with a half court steal, he seemed trapped in the corner, but made a long cross court, bounce pass to Pires in the other corner.  Pires’ three didn’t give Pleasantville any time to ponder the precision, and Somers now trailed by two with 13.8 remaining.

Somers immediately fouled, and Manly missed the front end.  But the possession arrow pointed to Pleasantville as Martin forced the jump ball on the rebound.

Somers fouling prior to the inbound, Manley sunk both, and once again, Pires would not let Pleasantville go home.  The Tuskers getting up court, Pires let loose from the other side and swished Somers within one.

Unfortunately, the ref thought Somers called a timeout, and Manley hit two technical free throws with 5.5 left. But Pleasantville wasn’t off the hook yet.

Fecci got his hands on the inbounds, and the ball went off Manley.  This left Somers to cue up Pires again.

Taking the crosscourt inbound from Fecci, Pires out jumped two defenders and tipped the ball to himself for a look at the basket.  The gymnasium awed in wait, the ball bounced high off the front of the rim and the Panthers finally had their escape.

TAGS : Somers Pleasantville basketball
Let us know how you like this article. Like it and Rate it below.
611 0
0
Thanks for rating this article
0 stars - by 0 user(s)