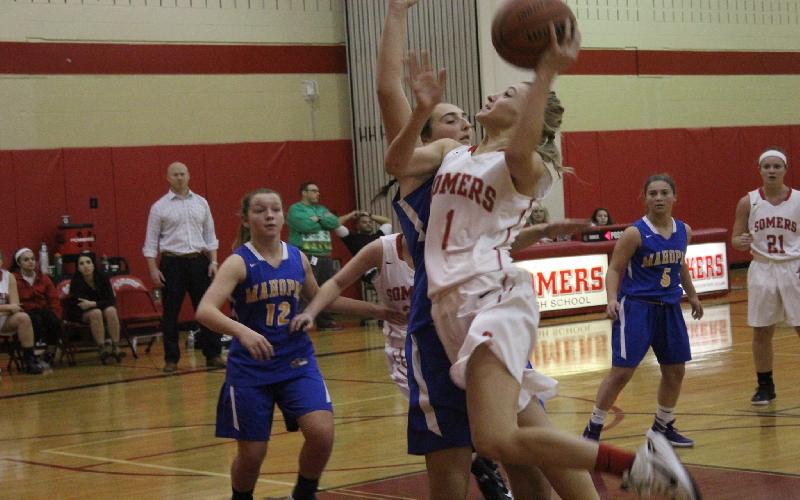 Friday night in the first round of the Somers Basketball Tournament, the home team looked at the disadvantage in the presence of a Mahopac front line that showed enough size to possibly push the Tuskers around on the post-up. Siobhan Hynes did just that off the opening tip. But Somers had no problem converging inside the rest of the way, while strong ball movement and outside shooting for Somers collapsed any chance for the Indians to keep pace.

The 2-0 lead did hold as the Somers rim played host to a lot of roll off for almost half the first period.  But a steal by Danielle Cucchiarella finally got Somers ready to bounce.  On the break, she hit Jackie Penzo who didn’t shrink as Mahopac converged in the paint, and Hannah Angelini buried the three off the kick back.

Another three by Angelini had Mahopac double taking moments later and then Livvy Lipski put the Deja Vu on the Indians with back to back baskets.  Mahopac would quietly close the quarter at 11-4 with two free throws after a belabored drive through the paint from center Claire Felix.

Along with Hynes at forward, this interior play would mostly prove to be the balance of the Mahopac scoring attack.  As such, they were no match for Penzo on the outside - especially as she got into it with Danielle DiCintio at the point.

At the outset of the second, Penzo found DiCintio on dribble penetration for three more, and the freshman guard returned the favor on a long outlet pass to her running mate, who hit Lipski for a 17-4 lead.  Following another Lipski jumper, the Somers onslaught briefly paused for two more foul shots by Hynes.

But any chance of a slow down quickly were put to rest as Lipski hit another three and expanded the lead to 22-6.  Momentum didn’t get much chance to change either after Zina McInerney drew a charge, and Hynes hit from the top of the key.  Attuned to the mini shift and making the most off the bench, Nikki Fiorino called for the ball and delivered a three to close the half at 25-12.

Mahopac again rolled out their lumbering offense to start the third.  Hynes got the ball down low and sunk two free throws after being fouled among a morass of Somers defenders. But she did finally make a little space by hitting a turnaround jumper to get Mahopac within 11.

To no avail, Penzo doubled down with two more threes to set Mahopac straight and open the lead to 33-16 at the 4:45 mark of the third.  Following a few more Hynes’ free throws and a McInerney three, Penzo had Mahopac doing the math again, and a three at the top of the key tallied to a 16 point deficit with one quarter to play.

Twice Mahopac would get within 11 but the slender Penzo stood tall at the slights. She hit open jumper at 37-26, and then found Livy Rosenzweig cutting to the hoop who made one of two at the line.

Any doubts were finally put to rest as DiCintio made a step back three to open the lead to 16 enroute to the 50-35 final.

TAGS : Somers Mahopac Basketball
Let us know how you like this article. Like it and Rate it below.
299 0
0
Thanks for rating this article
0 stars - by 0 user(s)