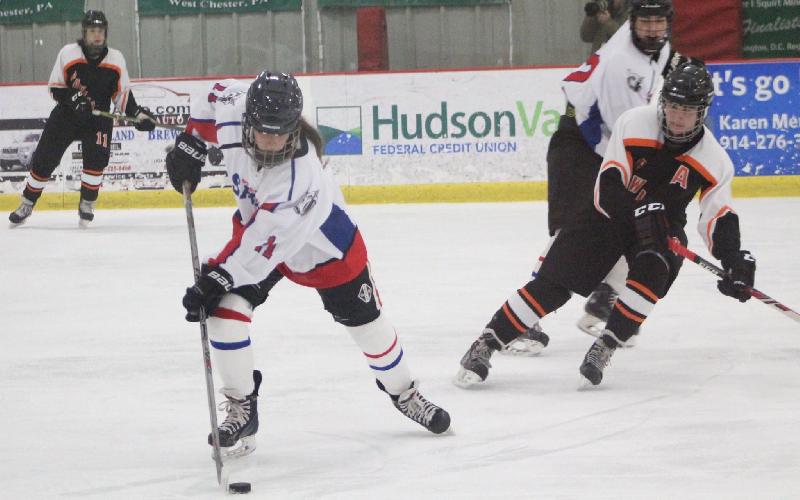 Sunday night at the Brewster Ice rink Somers/North Salem and Pawling both showed that they had players who could cut the ice and split the defense.  But individual play could not condense a sustained Sabres offense that divvied up the Tigers and scratched out an easy 7-2 victory.

Nonetheless, Pawling opened the scoring as Somers could not clear in their own end.  Cal Hade covered a loose puck and took a wrist shot over the shoulder of Somers goalie Ben Winter at 10:28 of the first.

Somers didn’t wait long to answer, though. Brandon LaSpina took a deflection high off the board and put a shot on goal from the right of Pawling goalie Louie Bonavenia.  The rebound popping out front, LaSpina kept working the puck until Carley Bauckham made the most of the chaos and stuffed it in for a 1-1 tie at 8:19 of the first.

The back and forth appeared to still be in play as Pawling’s Nick Merendino danced through the Somers defense and put a wrist shot on Winter.  The rebound had the Sabres scrambling and forced Somers/North Salem into a penalty at 5:36.

But the Sabres didn’t let the numbers leave them on the short end. Anthony Morea broke up a pass at the blue line, and the Pawling power play was now giving chase. Morea got the puck to LaSpina breaking on the right, and the forward gave the Sabres the upper hand again at 5:11.

Merendino again tried to keep things even handed with more maneuvers in front of Winter. But a glove save with 44 seconds remaining in the first left plenty of time for Somers/North Salem to send Pawling sliding.  The Sabres taking the face off, the puck came to LaSpina and a wrist shot this time from the left opened up a 3-1 lead.

Following the intermission, Somers kept the pressure on. However the score held for most of the second period.  The Sabres best chance came as William O’Leary’s shot from the left side yielded a couple of rebounds among the morass.

But no one could get a stick on the puck that kicked out point blank.

A tripping penalty on Morea at 9:15 once again positioned the Tigers to claw back.  But Winter stood his ground as Chris Henke couldn’t convert after Merendino found him from behind the net.

Rachel Ross and Bauckman didn’t convert on the other end either when they went back to front moments later. Only the deft little slight of hand Ross executed wowed the crowd and poised Bauckman to do her own disappearing act with the puck.

This left the bewildered Pawling goalie on the defensive and whistled for tripping. Pawling would kill the power play, but as the penalty expired in the Somers end, Bauckman held the impetus this time. She found O’Leary streaking down the left, and he hit Will Wiegelman out in front of the helpless Bonavenia at 4:44 of the second.

Bauckman would do the honors again a minute later. Her slap shot from the right had Michael Garrity putting the finishing touches on the period with the tip that made it 5-1.

The sway decidedly in Somers/North Salem’s favor, LaSpina put it out of reach in the third.  The hats came off with his third goal at 12:12 and Morea closed the scoring at 2:42 - a la LaSpina on the assist

TAGS : Somers Pawling North Salem Hockey
Let us know how you like this article. Like it and Rate it below.
196 0
0
Thanks for rating this article
0 stars - by 0 user(s)

Coverage of Section One Soccer Final at Lakeland High School.