Somers Turns Cornwall over in 28-7 Victory in State Regionals

Tuskers are One Win Away from the Carrier Dome 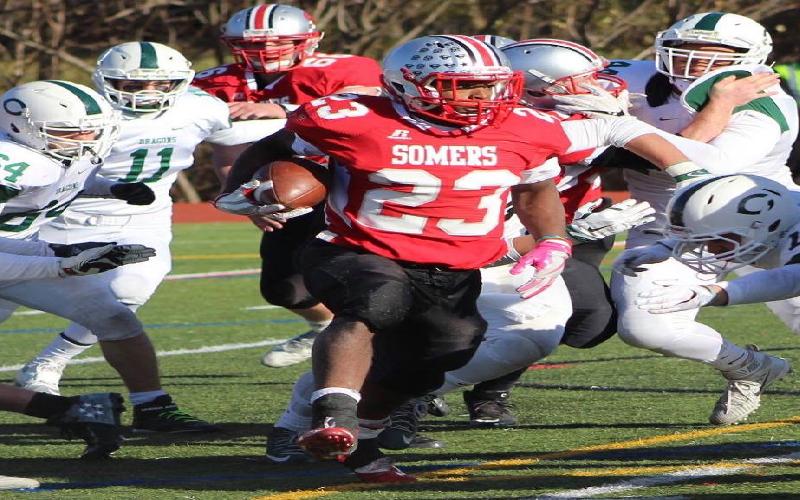 On Saturday Afternoon at Mahopac High School, Somers began its State Regional Quarterfinal Match up against Cornwall with a quick three and out. Both teams then held serve through the next three possessions by fumbling the ball away each time. But Somers broke decisively, and Somers' ace Messiah Horne gave Cornwall no return as he burst through the line for a 57 yard touchdown run.  The stampede begun, Cornwall could not get a grip and an onslaught of turnovers allowed the Tuskers to easily string up yet another opponent.

After settling in following the first possession, the Tusker side was quick to get out of its seats as Cornwall’s Chris Robinson fumbled Kevin Olifiers punt.  Thomas Tooma pounced on the pigskin, but almost before the faithful could shimmy back, Horne returned the favor.

The turnover at 8:58 now had Cornwall ready to change it up. WR Shakir Henry took the handoff in motion for a 14 yard far sideline run and Cornwall QB Joseph Lynch paused the Somers defense with a play action that put WR John Lalanne at the 47. Cornwall then got across midfield on an inside run by RB Dominick Marzigliano.

But Tooma again was quick with his paws.

Marzigliano coughed up the handoff, and Tooma’s recovery gave the Dragons another drop to tally.

Cornwall was soon counting off in the direction.  Horne took a second down handoff, and the game’s co-MVP didn't feel the Dragons breathing down his neck for very long before pulling up in the end zone.

Trailing 7-0 at the 6:28 mark, Cornwall responded by getting the ball back beyond midfield again but once again extinguished themselves.   A completed screen pass to Ian Engenito found the ground, and Vince DeFilippo had the scoop at the 37 yard line.

Despite stuttering after a illegal procedure on 4th and one at the 44,  Somers didn’t deter, and let its defense do the talking.  Antonio Vieira stepped in front of a Lynch pass underneath and set the Tuskers up at the one. Olifiers would do the honors on a keeper that put Somers up 14-0 with 11:39 left in the half.

Cornwall didn’t have much of an answer this time. The Dragons were quickly forced to punt when Tooma ran down Lynch at the 33 and put the Cornwall QB on the ground for good. Shaken on the field for several minutes, he left the game and did not return.

Nonetheless, Somers was stalled again by an illegal procedure on a fourth and 7 at the Cornwall 28. This time, though, Somers special teams added a say to Cornwall’s loose hands.  Olifiers gently pooched his punt, and third string QB Nick Sottolano was really up against it at the nine yard line.

Two plays later on a roll right, Daniel Venditto leveled the hit and Timothy Sweeny applied the pain with another Somers recovery with 3:35 left in the half.

A holding call hesitated the Tusker advance, but runs by Pires and Olifiers got Somers the glimpse they needed. In position at the nine on third and six, Horne bumped to the left, and there was no going down as Somers took a 21-0 lead to close the half’s scoring.

Unfortunately, for Cornwall the second half was more of the same.    Sottolano at the helm, Cornwall handed the keys to Marzigliano, and he bruised and ball controlled his way to the Somers goal line. But on third and one from the three, Sottolano took his turn again, and Jack Gilroy came up with the fumble when the snap was muffed.

Any chance of playing field position quickly lost traction on the legs of Horne.  On third and 11 from the six, the senior RB found a hole to the left and raced 88 yards down the near sideline to put the Dragons on life support.

After getting Somers to the one, Horne left it to Olifiers to give Somers its keep and suck any wind the Dragons had left. A few more fumbles and a TD with two seconds remaining by Cornwall told the final tale - leaving Somers to carry the torch to Burnt Hills Friday Night.

TAGS : Somers Cornwall
Let us know how you like this article. Like it and Rate it below.
635 0
0
Thanks for rating this article
0 stars - by 0 user(s)

The Lewisboro Lightning Never Quit As Their Three Year

Germany, Brazil, France And Spain Have Chances To Lift

The 2018 FIFA World Cup is beginning in June, 2018. Germany, France, Brazil, Spain are favourites to lift the world cup..