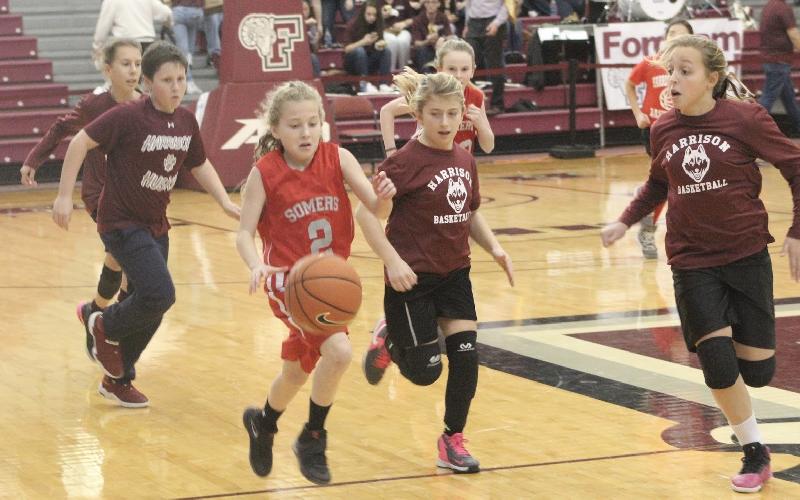 Coverage of Somers versus Harrison Girls Basketball game at Fordham

On Saturday, January 21, the Somers 5th Grade Girls Basketball team got the chance to show their game at a decidedly larger stage than the Intermediate School - facing off against Harrison during halftime of the Fordham, Virginia Commonwealth women’s basketball game. Still, 10 year old Eva Rodgers didn’t let the big stage confuse the basketball bottomline as she warmed up.  “It’s the same game - just in front of more people,” said Eva. But Somers Girls Commissioner Dom Giudice didn’t see the setting creating as much focus for the girls as the one on one they would get inside the Fordham locker room.

Awaiting a pregame pep talk from the Fordham coach Stephanie Gaitley, he said, “They’ll be looking into her eyes. She’s so magnetic, and they’ll get the strong message of community service, basketball and family.”

Shooting guard Jordan "McMorrow seemed on point at the two before even getting Gaitley’s insights on the basketball side.  “One player can’t do it all,” she said. “You have to pass the ball and get open for your teammates.”

For the latter, Jordan knows the drill. “You have to cut and go off picks,” she showed off her acumen.

Chloe Gabrielle exhibited plenty of flash as she went through warmups and doesn’t allow her place as the shortest girl on the team to affect her stature.  “I just have to shoot better and dribble better,” Chloe said confidently.

In the paint, Ruby Ellison is all about holding her end up.  “I need to be big and aggressive and work hard at forward,” she said.

Ruby hoped her performance said as much to the college players she aspires to, while Molly Fink admitted the larger stage made her a little nervous. “I’m afraid if I do something wrong everyone will see it,” said Molly innocently.

But Coach Gaitley’s pregame hopefully helped put Molly’s fears into perspective.  Despite being from a basketball family that includes a brother who is an assistant coach with the San Antonio Spurs, her father’s, “pass it on” philosophy situated importance elsewhere. “Every day try to do something nice for someone else,” the coach had the girls attention.

The baseline established inside Fordham’s lines, basketball 101 comes second nature to her Rams. “Our team is very unselfish,” said Gaitley.

At the same time, Gaitley stresses to her young woman that the good fortunate they enjoy means basketball should never have their heads in an exalted position nor hanging low. Gaitley also gives everything she has to her job and expects the same in return.  As such, the long time coach leaves both considerations out of her job description. “I should never have to coach effort or attitude,” she asserted.

Of course, no one is perfect, and just in case, Gaitley points to Martin Luther King to help her girls keep it together.  “The ultimate measure of a man is not where he stands in moments of comfort and convenience, but where he stands at times of challenge and controversy,” his words are featured prominently on the locker room walls.

The Rams then entered and took high fives from the young girls. Maybe taking the uplift, Fordham held a 13 point lead in the first half, and both girls’ teams took the baton for the 10 minute exhibition. Running with joy and abandon, the game’s only points went to Jordan "McMorrow.

Unfortunately Fordham could not take the cue and fell by two in the final minute. But Jordan didn’t miss the message the Rams put forth with their effort. “They never gave up - down, tied or ahead,” she concluded the day.

TAGS : Somers Fordham
Let us know how you like this article. Like it and Rate it below.
731 0
0
Thanks for rating this article
0 stars - by 0 user(s)

The history of cricket is so old that it is almost impossible to know everything about cricket. Outside the field on the cricket field and some deliberately, there were many things in some unknowns which would not be known to everyone.

Allan Border Versus Javed Miandad In The 1980s.

The article speaks about the great contribution of legendary batsmen Allan Border and Javed Miandad. They helped the countries in numerous victories both in Test Matches and One Day Internationals..

The Facilities and Equipments Used in Playing Volleyball