Somers Falls to Mt. Vernon 53-41 in First Round of Yorktown Tournament

Mt. Vernon Knights Put Somers on the Outs in Yorktown 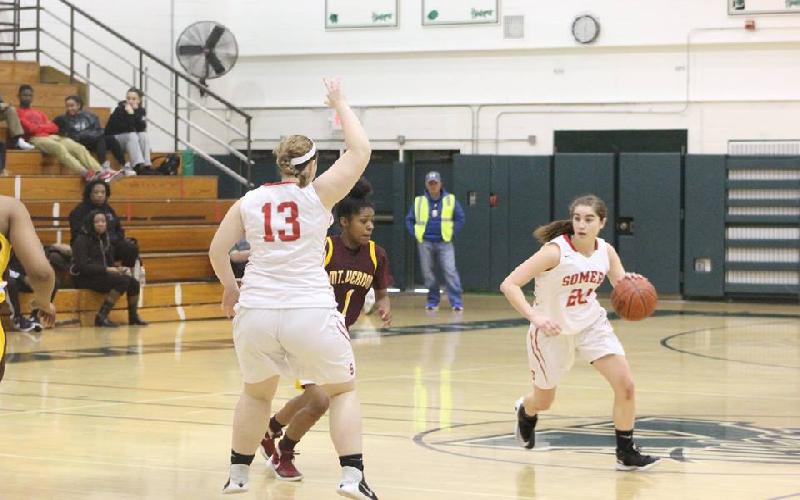 On basketball tradition alone, Somers had no know they were up against it versus Mt. Vernon in the first round of the Yorktown tournament on Saturday.  Throw in a dominating inside presence and deadly outside shooting, and the Tuskers were probably going to need a perfect game to pull off an upset and keep the past at bay.  Nonetheless, Somers was up to the task at the outset - especially on the strength of Hannah Angelini scoring all 12 of the Tuskers first quarter points. But sloppy play to start the second gave Mt. Vernon enough room to conjure their lineage, and Somers found themselves too far behind to stand in the way of the legacy these Knights are continuing.

Mt. Vernon began the contest with the inside out that their billing arrived with. Tynasia Williams came open on the three for the game’s first score, and following Curstyn Moore’s coast to coast, Rebecca Wilson’s attempted put back had her sinking two free throws for a 5-0 lead.

Keeping the ball moving, Somers answered right back.  Angelini took feeds from Jackie Penzo and Stephanie DiCintio and tied the score with a two and a three.

The back and forth continued as Williams sandwiched a three in between two more from the Somers’s hot hand.  But after Williams stood tall to take a charge, Wilson stepped in for a deuce at the top of the key and a 10-10 tie.

Penzo then did her own double duty on defense with a half court steal to put the stops on the Knights, and the Somers offense was on the move again.  Once again, Angelini took the good ball movement and stopped short on a floater in the paint to give the Tuskers a 12-10 lead.

Unfortunately, that was the last time Somers would have the drop on the Knights.  Moore put back her teammate’s miss from the foul line and then hit a short jumper to close the quarter at 14-12.

The second began with Somers forcing a jump ball and taking the possession arrow.

But the Tuskers turned the ball over on the way up court and Nakilye Flags converted a conventional three point play on the break.

A Somers’ travel gave Mt. Vernon the ball again, and Moore followed a William’s miss to open up an eight point lead.  Angelini did give Mt. Vernon pause with a baseline drive, but a few more errant passes kept Somers off the attack, and Mt. Vernon certainly did sit back

Cheyenne Talbot’s three expanded the lead to 23-14, but Somers hadn’t seen anything yet. Wrapped around two more field goals by Angelini and more work under the boards by Wilson, Kali Palmen hit three triples and danced a nifty two step on the baseline to give Mt. Vernon a 37-18 lead.

Somers did close the half with a three by DiCintio and closed to within 11 on a conventional three by Penzo and three above the arc from Livvy Lipski, but the brief blip didn’t mean the Knights forgot how to shoot.  Williams stepped in for a two and Giahna Mason’s three got her into the long range plan to give Mt. Vernon a 16 point lead.

Still, the Tuskers weren’t ready to kick back for the long weekend and made short work on the fastbreak to close to quarter. Angelini found Penzo on the three on one, and the point guard drew in the defense to give Faith Anne Ferguson the easy lay up in the paint.

To no one’s surprise, Wilson answered in the low post to get Somers back on message, but Angelini clearly didn’t get the memo and made the basket of the game.  Driving from left to right through the paint, the game’s high scorer was left contorted underneath and was still able to negotiate the necessary english to bank it off the square for two more.

Somers would cut the lead to 11 several times but could not connect on a number of open threes before finally falling 53-41.