Strong Inside Play from G'mrice Davis Leads the Way for Fordham 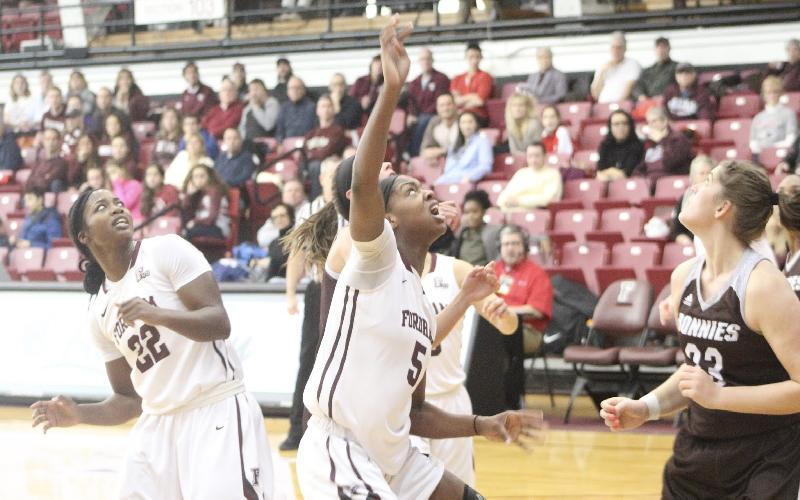 Coverage of Fordham’s 57-45 Victory over the St. Bonaventure Bonnies

On Saturday afternoon versus St. Bonaventure, the Rams mostly stayed away in the first quarter and built a 17-8 lead on the outside shooting of Danielle Burns and Hannah Missry. But after the Bonnie's equaled the task to close the half in a tie, the Rams got down to business by going down dow low.  Over matched on the inside, St. Bonaventure could not keep up and finally bowed out in Fordham’s 57-45 victory.

Good ball movement off the tip gave Matea Britvar an opening just inside the arc and St. Bonaventure’s only lead of the afternoon.  Missry, Burns and Lauren Holden didn’t give the Bonnies any chance to sit on the success either.  Two threes and a pull up at the point already had Bonaventure coach Jesse Fleming signaling the refs and the Rams for a stoppage at 7:53.

Layups by Mariah Ruff and Gabby Richmond returned the pause St. Bonaventure was looking for, and the Bonnie defense seemed to have Burns stalled above of the arc and out of options.

But she straightened up and buried a three as the clock ran down.

The Rams now back in gear, Burns kept the ball on the move on a pass inside from G'mrice Davis, and Missry again made the most of it from above the arc.  Fordham then went up by nine as Davis foreshadowed Bonaventure’s third quarter end by spinning and winning from the post up.

She also closed out the nine point first quarter lead off a Holden miss, but Richmond kept Bonaventure from getting behind the eight ball.  She first did the dishing on an open three from Britvar and completed the swishing by taking Davis baseline.  Not done yet, she played point forward in the paint and Mckenna Maycock was rewarded on the kick out.

Danielle Padovano eventually answered back on the low post to stop the 7-0 run, and after Bonaventure Guard Jalisha Terry climbed over Fordham’s interior defense for a 19-17 score, the Rams seemed poised to break away again. Following Anna Kelly’s floater, Padovano got penetration off a fake from the arc, and Kreslina took the double take for the three.

But Ruff foul shots and a short jumper by Richmond kept it a game and knotted the intermission at 24. Unfortunately for the Bonnies, Fordham didn’t waste any time in playing the second half to their strength.

Despite a miss and a turnover by Davis to start the quarter, she didn’t collapse in the least as Bonaventure converged inside and she found Kreslina for the three more.  Davis then left the post up to Burns, and Fordham went up 29-26 at the 4:45 mark.

A missed three on the other end would set the stage for Davis to begin her battering.  Sandwiched between Fordham masterfully beating Bonaventure on the full court press, Davis would not be denied inside on three separate occasions, and the Rams built 36-28 lead.

Fordham didn’t let a deuce by Ruff slow them down or constrain the home team to just thinking big. Kreslina buried another three, and Kelly played bump and run for the conventional three point play on a tough baseline drive.

Closing the quarter at 41-30, Fordham stayed away again to start the fourth and got all the distance they needed in opening up a 14 point lead on Missry’s triple. Eight was the closest Bonaventure would get, and in the final two minutes, all the game Fordham needed was sinking free throws.

TAGS : St. Bonaventure Fordham women's basketball NCAA
Let us know how you like this article. Like it and Rate it below.
134 0
0
Thanks for rating this article
0 stars - by 0 user(s)

Amanda Gisonni Strikes Out But Will Always Be A Hit Wit

An Uncle endures the pain of his niece's pitching performance even though he knows she will persist.