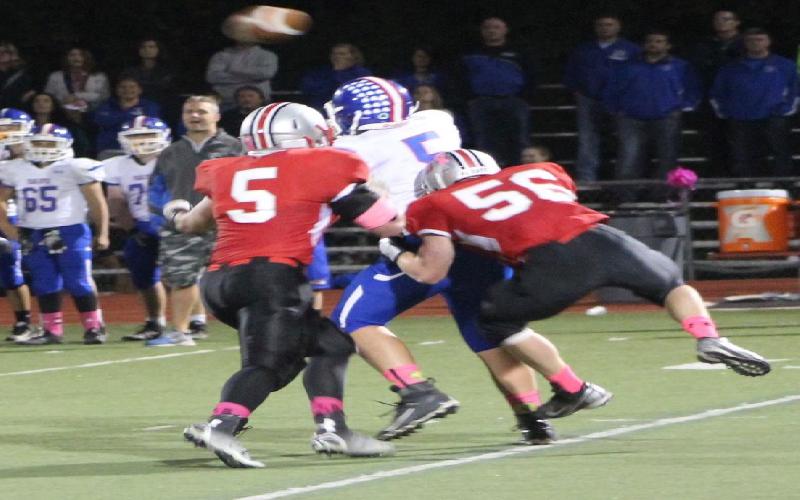 Featured a menacing sized fullback in Jonathan Farley, Pearl River didn’t have to spell out ball control offense on their Jersey’s for Somers to get the message. This especially as the super-sized meal literally ate the entire third quarter clock.  Quarterback Kevin Scrima and wide receiver Troy Travaglino weren’t bad in that regard either in executing the short pass. But Somers first two plays from scrimmage at the high school last night negated any notion that the visiting team would leave the Tusker offense on the sideline and off the stampede.

Following Pearl River’s first three and out, Matt Pires took a Kevin Olifiers screen on the near sideline and danced a doubled take on his defender - giving the Pirate cornerback the shake. The home crowd barely in their seats and readied to stomp their feet, Pires then disappeared through a sea of jerseys before finding port on the far sideline and frenzying the crowd with a 50 yard score at the 9:57 of the first.

Pearl River again went quietly in their next possession, and this time Messiah Horne did the disappearing act.  The senior running back cut through a hole on the left, and a flash was all Pearl River saw as 55 yards quickly vanished for a 14-0 Somers lead.

To Pearl River’s dismay, their ball control offense only last three plays again, and Somers had no reason to oblige.  This time, though, the scoring drive was glacial.  Somers ran four plays.

Antonio Vieira rushed for five, Horne got 12 more, and following an incomplete pass to Pires, Horne deferred on any pretense of deft. Cutting through the line, Horne fought off Pirates all around, and once breaking free for six more, the visitors weren’t far from going down with the ship.

Pearl River did manage a few first downs with the help of Farley on their next possession but got no farther than their own 40.

A few Somers miscues allowed the Pirates to tread water, though.

Horne fumbled on the Pearl River 18 and then out of the end zone on the next possession. Pearl River returned the favor in between and driving to midfield following the touchback didn’t faze the home crowd - especially after Vincent Defilippo’s return retook the field position.

Reaching the Pearl River 49, Somers ground game made sure to keep the pigskin on its toes and not the turf.  Save a 19 yard reception to Jack Gilroy, Horne had a two first down runs before easing into end zone from the three at 3:43.

All 28 points on the Somers side and none of the urgency, the Pirates were forced to throw up a flare, and Ryan Elliot made easy pickings of answering the call.  The senior cornerback snagged the overthrow on the near sideline and raced 45 yards for a 35-0 lead.

The second half and raising of the white flag no more than a formality, Horne had another long touchdown and Richard Haigh quartered the crossbones on a pic six as the clock ran out.

TAGS : Somers Football Pearl River
Let us know how you like this article. Like it and Rate it below.
547 0
0
Thanks for rating this article
0 stars - by 0 user(s)