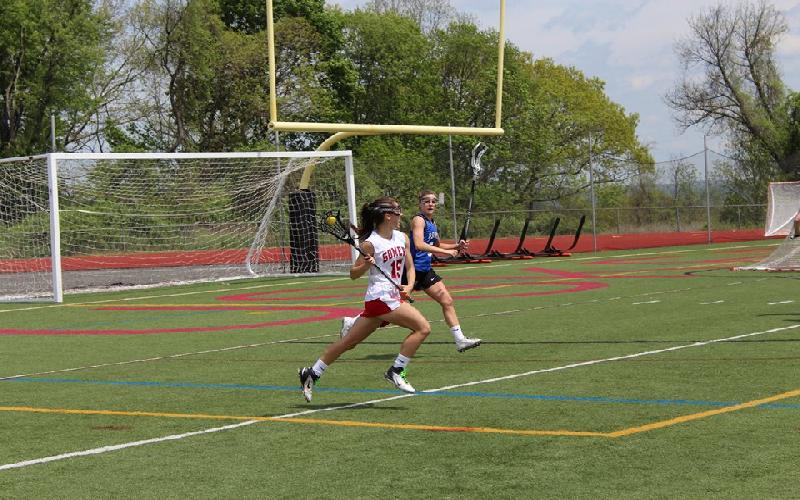 May 14, 2016 coverage of Somers Girls Lacrosse victory over Bronxville at Somers High School

The two powerhouse girls’ lacrosse programs of Somers and Bronxville squared off at Somers High School on Saturday. Living up to their 5th and 11th NYS rankings, and racing up and down the field all afternoon, the Somers Senior Day crowd definitely had their necks tweaked before the Tuskers finally pulled away with a thrilling 13-11 victory.

But the game quickly bucked in favor of the Broncos. Allie Berkey corralled the opening faceoff, headed for the net and got position for goal number one at 24:12.

39 seconds later, the home crowd was dismayed with a double take.   Berkey again won the scramble, got on her horse and beat Somers Goalie Jessica Monaco for a 2-0 Bronxville lead.

Somers broke the Broncos’ early stride when Gabby Rosenzweig gobbled up the subsequent faceoff and got the Tuskers on the go.  She then kept it in the family by giving a step to her sister Livy on the outlet, and she raced down field to get Somers on the board at 23:16.

Livy Rosenzweig made like lightning again after Rachel Riger picked off a Bronxville pass in the Somers end.  Taking the left side all the way down field, Rosenzweig didn’t waste the daylight – leaving Bronxville Goalie Claire Kraemer no chance as Sydney Ericson was set up perfectly for the 2-2 tie.

Defense again sparked Somers when Monaco didn’t get caught in the back and forth between Billie Walsh and Olivia Jensen.  Stuffing Jensen’s point blank shot with her catcher on the pass from behind, Monaca put Somers on the run.

An interference whistle nullified a Somers goal, but Izzy LaRocca made easy work of Kraemer on the possession to give Somers the lead at 17:39. Somers didn’t waste time either before doubling down on the score and the Rosenzweig’s. Livy scooped up the faceoff and found Gabby on the run to leave Kraemer digging at the synthetic turf as goal number four skipped past at 17:28.

But Bronxville’s Lilly Grass was the real thing when she marked her territory moments later.

Whirling into some open space to the right of Monaco, the junior kept the score contained at 4-3 with 16:26 remaining.

Monaco wasn’t so forgiving with the real estate the next time, though. After Beth Finley came open off a pass from behind by Mason Warble, the Somers goalie stonewalled the point blank attempt and heads turned once again in the other direction.

Livy Rosenzweig led the rush, but her goal was disallowed on the whistle. Nonetheless, she took possession and gave Somers a 5-3 lead at 14:29.

The difference was again cut in half at 13:58.  Off the scramble, Warble got the ball to Finley, and after the play was blown dead on the advance, Finley showed no pause in bouncing one past Monaco for a 5-4 deficit.

Bronxville took the next faceoff, but Monaco’s save on the rush sowed the seeds of another two goal lead.  Set up on the offensive, Gabby Rosenzweig threaded the needle inside to Teagan Lucchese who put Somers in stiches again at 12:34.

After Walsh got Bronxville within one at 12:10, the Broncos finally broke the back and forth to tie the score.  Lilly Grass took a pass from behind and left the Somers’ defense in a blur at 10:22.

A lob pass into Finley by Grass poised the Broncos for another goal, but Monaco came up big at point blank. Back the other way, Kraemer also got into the act with her catcher on a Katie Campbell shot.

Only the Broncos were able to ride their goalie’s stand down. Walsh broke up field, hit Berkey on the outlet, and she bested Monaco on the bounce to regain the lead at 7-6 with 5:02 left.

A minute later, Finley stripped Gabby Rosenzweig in the Somers end, and the Broncos were soon boasting a two goal lead.  Finley took off, got the ball into Berkey and Lucy Harman made easy work of her rebound at 3:56.

A Bronxville power play threatened to add more to the Somers woes. But Monaco snuffed a scrum around the crease with her catcher, and Livy Rosenzweig did more needle work with hers to get the Tuskers in position again.  LaRocca took her teammate’s nifty pass into the middle, and one move was all it took to pull within one at 1:02.

Not done yet, LaRocca left it to Lucchese to make the cut. Playing quarterback this time, LaRocca lofted a pass inside to Lucchese who tied the score at eight to close the half.

The start of the second half again found LaRocca in the middle.  Livy Rosenzweig managed to bounce a pass inside to LaRocca who converted to give Somers the lead at 24:25.

But after Monaco cut off a pass from behind her own net and got the Tuskers breaking, Olivia Jensen would leave the home team with the tails wagging. The Bronxville attacker stripped the ball before Somers could pass midfield and tied the score at nine with 22:32 left in the game.

Undeterred, Somers took a 10-9 lead on Gabby Rosenzweig’s goal, while the separation Livy Rosenzweig  gave her teammates on the next offensive possession allowed Somers to do the same on the scoreboard.  Spinning through the Bronxville defense, she hit LaRocca on the run, and Sophia Fiorino took her pass and the empty space to give Somers a two goal lead at 20:59.

The back and forth would ensue for the next nine minutes – only neither net was disturbed. But the end was foretold when the Somers goalie hustled herself closest to the ball on Berkey’s shot out of bounds. Back the other way, LaRocca went over the top to Sydney Ericson, and her goal made it 12-9 with 11:59 remaining.

The Tuskers gave Bronxville no time to consider their disposition either.  Fiorino scooped up the faceoff, got the ball to Gabby Rosenzweig, and she riffled a pass into Hannah Tiso.  All that awaited was the crowd’s roar, and the four goal lead was insurmountable – despite two late goals by the busted Broncos.

TAGS : SomersBronxvilleLacrosse
Let us know how you like this article. Like it and Rate it below.
298 0
0
Thanks for rating this article
0 stars - by 0 user(s)