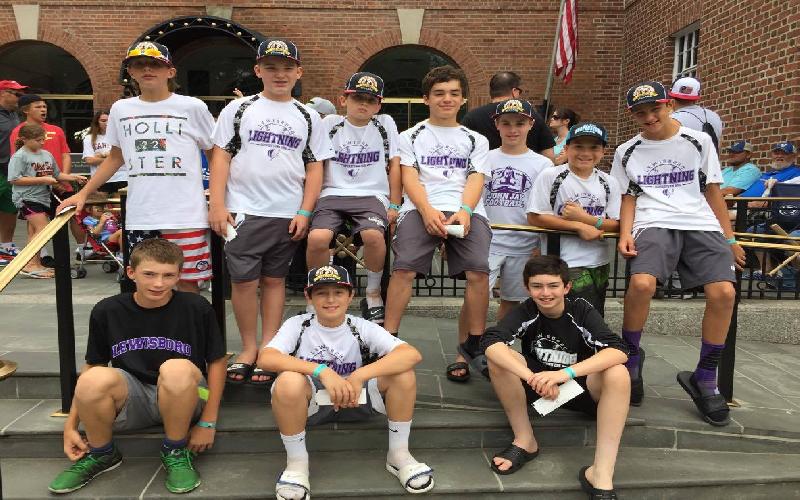 In baseball when you start slow, a cold, wet spring always stands at the ready as an explanation.  If the team will warm with the weather certainly remains a question, but it didn’t for Lewisboro Little League Coach Jason Pizer as his twelve year olds got caught in between all the April rain drops.

“On day one,” Pizer says he knew the Lewisboro Lightning was in for something special in their final year together as a Lewisboro Association Team, which included his son Jackson.

Winning 15 of their last 18 games, the Lightning won the WBA/RBA title and went on to finish 11th out of 48 in Cooperstown All-Star weekend.  Playing the game properly, getting better and having fun has triangulated the ground rules since he took over in 2014 as coach with Glenn Capobianco.  “You can’t really weigh those things more than the other,” says Pizer. “They are equally important.”

At the same time, he acknowledged the importance of having three or four big bats and five strong pitchers but had no need to single any players out - whether they showed the way in words or by example. “As far as leaders go,” he said, “they were all kind of equal.”

On the other hand,  a late game crooked number leveled off a high powered team from the Bronx and began Lewisboro’s separation from the pack. “We won on a walk off home run in the 9th inning,” he says.

Not a fluke, more blast than bloop really got Pizer’s wife to her feet this season. “This is the year when kids started hitting home runs,” said Leah Pizer. “That was so much fun.”

Still, as former secretary for the Lewisboro Baseball Association, she sees that the frequency at which the ball left the yard isn’t what got the fans stomping their feet.

“The most exciting part has been the switch to being a good baseball team,” she said. “Instead of kids out there scrambling to understand, they know their positions, they know the plays and that made it more enjoyable.”

The sightline from the seats did come with a flip side, though. “I don’t get nervous because he’s very comfortable in the field, but I get incredibly nervous during his at bats,” she says of her son.

In the dugout, the switch north in venue did take a little acclimating but not because of the increase in size, stage and seating capacity. “They might have been a little nervous in game one,” said Jason. “The kids were gigantic.”

Settling in and elevating smarts over size, Lewisboro’s run came to an end in a 10-8 back and forth. “We were winning, gave up a lot of runs in the top of the 6th and loaded the bases but couldn’t get it done,” he said.

On the other hand, the finish said it all for Mom.  “The last game showed the incredible energy that these kids have,” she said. “They keep going, they keep fighting and they don’t quit.”

But as they disperse next year to travel teams and modified play, Jason is sure the kids see the long view.  “All the TV and MLB highlights,” he says, “everybody wants to hit a 10 run grand slam. Now they realize a base hit here and a base hit there, a walk, a strikeout, an error - it’s a marathon.”

Even so, the heart wrenching final game left the boys feeling stranded but not because of the runners left in a lurch.  All the travel time, bunking together and working with the coaches, Leah concluded, “They were sad it was over.”

TAGS : lewisboro cooperstown
Let us know how you like this article. Like it and Rate it below.
882 0
0
Thanks for rating this article
0 stars - by 0 user(s)