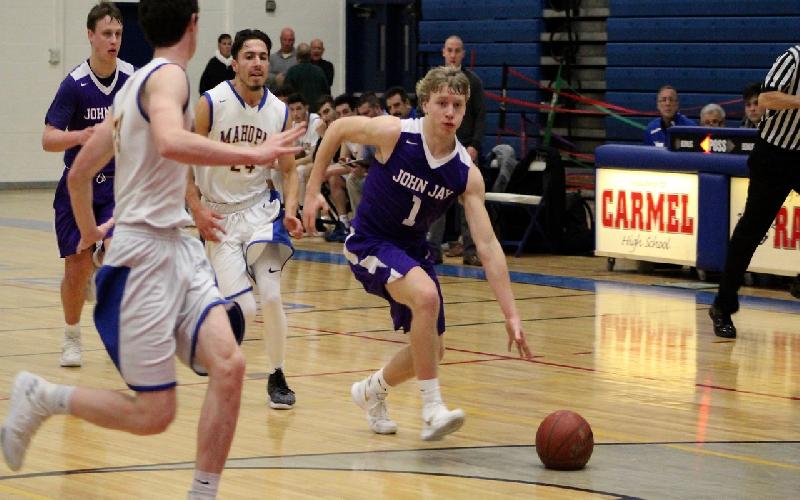 Mahopac High School jumped out to a 7-0 first quarter lead on the heals of a some tenacious defense.  But John Jay soon got up to speed, and the road back for the Indians was pretty simple, according Mahopac center Ryan Dugan.  “They were beating us off the dribble and then were able to score on the kickoff,” he said.  The Indians mostly stuck with plan and eventually pulled away with the victory in the 2018 Putnam Challenge.

Sean Nolan’s penetration got John Jay on the board when Brett Paulsen came open for the jumper at 3:05 of the first.  But Dugan and his game high 19 points wasn’t backing down.  He followed a baseline drive by Noelle Hall and then lead the break to put Mahopac up 11-4.

The Indians early start eventually left Mahopac feeling in a knot as the game progressed, though  More Nolan penetration freed up Brian Nussbaum for three, and Jake Cohen went glass from several feet behind the arc to tie the game at 13.

Coach Matt Simone could only lament the good outside shooting from John Jay.  “The threes were falling,” he said.

But Simone certainly gave credit to John Jay’s dribble offense. “This forced us into a lot of help defense, and they hit their shots,” said Simone.

Even so, turnovers kept the second quarter scoring low and had the game tied at 15 with 3:08 remaining in the half.  The final tally would ultimately undo Mahopac. “You can’t commit 29 turnovers and expect to win,” said Simone.

John Jay’s Dean Ford didn’t necessarily pay heed to the insight to close the half.  He had a half court steal to tie the game at 17 and then found Timothy Hogan cutting for the basket for the game’s last tie.  The half’s scoring closed at 21-19 when Ford converted on the fast break.

The writing proved to be on the wall.  Two of his team high 14 points, Nolan’s follow on the fast break capped a 14-2 run and opened up a 35-21 lead.  Still Dugan did what he could, and provided muscle with several tough follows.

‘They were tougher than us and came out faster and harder,” he said.

Mahopac did close to 43-38 and then 45-39 on a Justin Parker follow and foul shots by Dugan. But Shane Martinsen answered both times on a dribble pull up and roll through the paint with 3 minutes remaining in the game.

Mahopac did also cut to four with 1:35 remaining but could get no closer.   Dugan opined his own remedy going forward.  “We’ve got to knuckle up on the defense if we want to get more wins,” he concluded.

Mahopac fell to 3-4 with the loss.

TAGS : John Jay Mahopac
Let us know how you like this article. Like it and Rate it below.
284 0
0
Thanks for rating this article
0 stars - by 0 user(s)

Mitchell Johnson Is The Most Deadly Fast Bowler Of The

Mitchell Johnson is the most deadly fast bowler of the present day test match cricket. He had regularly bowled at 98 miles per hour.

Mahopac Is No Match For Tuskers In First Round Of Somer